On Y chromosomes, surnames, and reproduction. 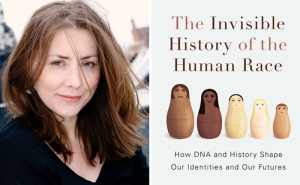 But the connection that was most interesting for me – and, yeah, also retrospectively obvious – was that in a patriarchally-named society, surnames will make the same journey as Y chromosomes.

They are coupled throughout time, in ways that researchers have investigated for, say, Scottish clans: a sort of scientific validation for the lineage claims that even in modern times are accompanied by property rights.  From Kenneally’s book:

“It wasn’t until 1957 that the ancient chiefly Arms were finally officially recorded.  Donald’s father assembled a significant amount of evidence to prove that he was in fact descended from the last known MacLaren chief, and he presented it to the Court of the Lord Lyon in Edinburgh, the Scottish heraldic authority that rules on title and is famously rigorous in its judgement.  The court decreed that Donald’s father had indeed descended from the last-known chief of Clan MacLaren.  When he was made chief, he acquired the legal title to some of the clan lands at Balquhidder that had been lost a few centuries earlier, including the famous Creag an Tuirc, the Clan’s rallying point from earliest times.  When he died in 1966, his three golden feathers were passed on to his eleven-year-old son, now the twenty-fifth chief since Labhran.”

Obviously the evidence presented at the time, as described in the above paragraph, did not include DNA testing – but apparently the MacLarens have been quite involved in DNA testing recently, and current results correlate with the prior historical claims.

The interesting thing to me is that names, and land, and Y chromosomes, all traveled together.  There has long been the sense that sons are special – even in western cultures, where to me it has not seemed like sons provide for their aging parents any better late in life than daughters do – with the idea that some special spark is passed from fathers to their sons.  And the journey of names reflects that.

And, right – now might be a reasonable time to mention that when K and I married, neither of us changed our names.  And we gave N a surname distinct from either of ours.  I am not particularly keen on the idea of patriarchy, and didn’t want to make my own contribution to that system of beliefs by giving my daughter her father’s name.  And, sure, some people pass along a mother’s name instead, but I personally don’t feel like the solution to a patriarchy is to institute practices that we’d have in a matriarchy…although in the short term it does seem reasonable.

And that’s in cases where there is an equivalence between CVs, etc., between people with different names.  You could make a much stronger argument by suggesting that employers should care most about a person’s ability to make the best of their circumstances, or overcome challenges, so if race were correlated with a difference in material advantages at birth, you’d not only want to preference minority applicants with equivalent CVs, but also those who might appear slightly worse based on numerically-documented facts on a job application.)

So, N has a new name.  She does have some amount of my genetic material, though.  Almost 50%.  So there’s that.

Although you could make an argument for using more of the trappings of matriarchy in cultural decisions.  Especially as reproductive science moves forward – it isn’t difficult to imagine a world that doesn’t need men.  Which isn’t just a joke, although I do recall their being a good joke-y treatment of this in a dialogue at the beginning of “Roger Dodger.”  Because you can produce mammalian offspring without the aid of men  – yeah, you need to deliver the genetic material in a laboratory instead of having it be carried by sperm, but is that such a big cost?  Already many couples in the U.S. employ the help of laboratory personnel for reproduction.

And, yes, recently it’s proven possible to engender children with the nuclear genetic material of two males, but this technique still requires a mother to carry the embryo, and a female to provide the egg (and the mitochondrial DNA, although presumably you could develop a technique to displace the mother’s mitochondria with those of one of the fathers).  So you could have a world without men, and humans would be able to propagate, but at the moment a world without women wouldn’t work.

(Bonus parenthetic insert!  Because I already have one exceedingly-long parenthetical inserts in this essay already – why not another one?

Many of those laboratory techniques to aid in reproduction were developed by men, and many of the doctors implementing them are men.  So is it unreasonable to think that this may have influenced the remunerations received by sperm donors, which are relatively high given the low risks and low time input after initial screening, versus those received by women, which are pretty crappy… crappy in a way reminiscent of the low prices flowing to organ donors.  Egg donors, like organ donors, tend to be impoverished and relatively un-educated.  And it seems that there has been collusion on the part of medical providers to keep compensation low.  From Kimberly Krawiec’s analysis of gamete markets:

“In February 1998, the Saint Barnabas Medical Center in New Jersey set off a firestorm of controversy when it placed advertisements in several New York-area publications offering potential egg donors $5000, twice the $2500 that the center had been paying.  The firestorm was provoked not because Saint Barnabas proposed to pay egg donors for their services, which it and other fertility clinics had been doing for years, but because the proposed payment increases were made in violation of an alleged understanding among New York-area fertility centers to pay no more than $2500 for eggs.  The ensuing debate (during which many fertility doctors openly discussed the need to control egg prices) quickly garnered newspaper and other media attention, and generated arguments in major medical journals.”)

And yet, despite the fact that reproduction from women alone is much more reasonable than reproduction from men alone, the production of offspring from men appears much more often in mythology.  There’s Zeus, creating Athena from his head.  A similar story associated with the Ramayana, in which Ravana created Sita with a sneeze.

Presumably men throughout time have felt bad about their limited role in propagation of the species and created stories to celebrate that men could have an important role… they just often don’t.

And there are others: Shiva created a mountain range by ejaculating onto the ground.  The sage Bharadwaja saw a beautiful woman bathing and ejaculated into a basket, creating his son Drona.

Which, right, scientifically seems ridiculous – children arising from spilt sperm?  Eggs, maybe… but sperm?  So naturally I had to include the phenomenon in my work.  As a twist on the very-real possibility of a world propagated by women alone, and a nod to the underlying mythology.