Memory plays an important role in my book.  Because, yeah, it’s fascinating, but also, you guessed it, because it’s important in the Ramayana.

One way to tell the story of the Ramayana would be to say that it’s about the gods’ effort to stop Ravana: dude practiced mighty austerities and so the gods were forced to give him a prize.  Apparently there’s a system where your goodness here on Earth causes the divine thrones to heat up, and eventually those thrones get absolutely unbearable to sit in, so a god swoops down and offers you a prize and you’re basically exchanging your goodness for that reward – the gods’ thrones cool off again.  And the prize Ravana won was immunity to harm from the gods.

But then they wanted to kill him.  The gods did.  Dude got too uppity, and they were having none of that.  So how does a god kill someone who’s immune from harm from gods?  You have to incarnate yourself as a human and totally forget that you’re divine.  And that forgetting is the important part – every now and then you might enact divine feats, and so have an inkling of remembrance that maybe you’re not quite human, but if so you’ll have to wait longer to let that memory fade before battling that immune-from-gods enemy of yours.  Only while you feel absolutely human can you fight.

Some people think all the delays in Rama’s journey to rescue Sita were enacted to give him enough time to forget, to become sufficiently un-godlike that he’d be able to fight Ravana and win.  Or, here’s a passage relating one of my favorite memory-lapse stories from the Ramayana, related in the Uttara Kanda: Hanuman became very powerful, at which point he started destroying things, at which point his brain had to be zapped so that he’d only remember his powers when necessary, and not tromp all over the monasteries like a raging kaiju.

Having obtained boons Hanuman became highly and powerful and accelerated in himself.  He became full like ocean, O’ Rama.

Having become powerful, the best of Mongoloids, started committing offences against Maharsis in their hermitages.

He broke the sacrificial ladles and vessels and also the heaps of banks belonging to the ascetics.

That powerful hanuman did all this type of jobs.  He was made invulnerable to all kinds of weapons by Siva.

Having known this all the Rsis tolerated him, the son of Kesari and Anjana.

Even though prohibited by his father, Hanuman crossed the limits which enraged the Rsis of the lines of Bhrgu and Angira and bestowed curse upon him.  O best of the Raghus.

That you will be unconscious of the prowess endowed with which you torment us.  You will be conscious of your power only after being reminded of it.

Thereupon, having devoid of prowess and glory, he used to wander in the hermitages silently and decently.

So, I had to learn about memory.  And I won’t go into much detail about it in this essay… I assume memory is a sufficiently complicated phenomenon that I can write about it twice, right?  For this essay, I just wanted to present a quote from Oliver Sack’s book “Hallucinations” because it both introduces the theory that memory is malleable – that is, every act of remembrance will change a memory, in some ways layering the very fact of remembering over the thing being remembered – and it gives me an opportunity to write about Proust.

Penfield’s notion of actual memories or experiences being reactivated has been disputed.  We now know that memories are not fixed or frozen, like Proust’s jars of preserves in a larder, but are transformed, disassembled, reassembled, and recategorized with every act of recollection.

For Gowers and his contemporaries in the early twentieth century, memories were imprints in the brain (as for Socrates they were analogous to impressions made in soft wax)–imprints that could be activated by the act of recollection.  It was not until the crucial studies of Frederic Bartlett at Cambridge in the 1920s and 1930s that this classical view could be disputed.  Whereas Ebbinghaus and other early investigators had studied rote memory–how many digits could be remembered, for instance–Bartlett presented his subjects with pictures or stories and then questioned and requestioned them over a period of months.  Their accounts of what they had seen or heard were somewhat different (and sometimes quite transformed) on each re-remembering.  these experiments convinced Bartlett to think in terms not of a static thing called “memory,” but rather a dynamic process of “remembering.”  He wrote:

“Remembering is not the re-excitation of innumerable fixed, lifeless and fragmentary traces.  It is an imaginative reconstruction, or construction, built out of the relation of our attitude towards a whole active mass of organized past reactions or experience… It is thus hardly ever really exact.”

So, most of that quotation is totally uncontroversial by now.  The idea that neural connections can become stronger or weaker with every remembrance, which changes the memories themselves.  But the thing I take issue with, in that, is the idea that for Proust memory was static. 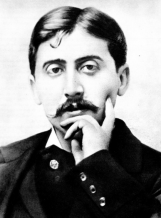 Marcel Proust did write about memories springing forth unbidden when he re-experienced an uncommon phenomenon, things like a particular smell, or particular sound, or particular physical imbalance while walking.  But his work as it currently exists (well… more specifically, his work as it exists in English translation, since that’s the only language I know how to read) does reflect mnemonic instability.  By the end of the book, for instance, Dr. Cottard keeps dying and returning to life; here, let me quote a line + endnote from the Moncrieff / Kilmartin / Enright translation of “The Captive & The Fugitive” (which, no, I’m not sure who wrote the endnotes):

“However, one of Cottard’s pupils…”

“Oh, by the way, I never offered you my condolences: he was carried off very quickly, poor fellow!”

“Ah, yes, there we are, he died, as everyone has to.  He’d killed enough people for it to be his turn to have a bit of his own medicine.”*

* Cottard will nevertheless reappear — indeed at this same soiree — to die during the Great War, in Time Regained.

Or there’s this endnote from the Mayor / Kilmartin / Enright translation of “Time Regained”:

* This passage is also rather surprising, since Rachel has been identified several pages before.  All such inconsistencies are attributable to Proust’s endless additions to his original text.  He died before he had time to resolve the resulting confusions.

… but to me, having Cottard cycle between death and life actually increases the veracity of the book.  Because it’s so easy to mix up stories in our memories… telling a story to someone and including as one of the principal actors a friend of yours whom you hadn’t met, for instance.  That type of chronological mix-up seems pretty common, and yet we can vividly picture the involvement of a friend who couldn’t possibly have been there.  And I like to think that those “errors,” the life/death cycling of Dr. Cottard, for instance, are things Proust should have kept in his book even if he’d had more time to work on it.  Because memory isn’t perfect, and he describes so many phenomena of memory well that I like to imagine his imperfections are intentional as well.

… Perhaps that last paragraph would be improved by appending that quote from James Joyce’s “Ulysses” that a lot of people like: “A man of genius makes no mistakes.  His errors are volitional and are the portals to discovery.”  But if I were going to quote Joyce, those aren’t the lines I’d pick – they are from the section of his book I like, Stephen Dedalus’s riff on Shakespeare, but I don’t agree with that particular sentiment.  Everybody makes mistakes, and the stuff I liked about the end of “In Search of Lost Time” probably wasn’t intentional and might’ve been “fixed” if Proust had lived longer, so I’d rather just celebrate that sometimes we make inadvertent beauty.  If I was quoting Joyce I’d rather find a way to work in this excellent chunk of ribaldry (which has the added virtue of being quoted for the OED’s entry for “scortatory” – definitely a fun word): 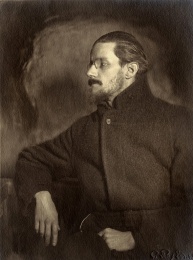 “Twenty years he lived in London and, during part of that time, he drew a salary equal to that of the lord chancellor of Ireland.  His life was rich.  His art, more than the art of feudalism, as Walt Whitman called it, is the art of surfeit.  Hot herringpies, green mugs of sack, honeysauces, sugar of roses, marchpane, gooseberries pigeons, ringcandies, Sir Walter Raleigh, when they arrested him, had half a million francs on his back including a pair of fancy stays.  The gombeen woman Eliza Tudor had underlinen enough to vie with her of Sheba.  Twenty years he dallied there between conjugal love and its chaste delights and scortatory love and its foul pleasures.  You know Manningham’s story of the burgher’s wife who bade Dick Burbage to her bed after she had seen him in Richard III and how Shakespeare, overhearing, without more ado about nothing, took the cow by the horns and, when Burbage came knocking at the gate, answered from the capon’s blankets: William the conqueror came before Richard III.”