As long as you think feeling angry is fun (does it say awful things about my personality that I do?), Linda Tirado’s Hand to Mouth is a fun little book.

Unlike Barbara Ehrenreich’s Nickel and Dimed, Tirado’s main focus isn’t analyzing why people are poor — she states, bluntly and in my opinion correctly, that the issue is simply not enough money.  Wages are low, hours are short (with bonus structural impediments to taking second jobs in order to compensate for short hours), and debt (especially medical debt) is high.

There are a few sections with analysis like what you may have read in Ehrenreich’s work, about the high cost of financial transactions for poor people, for instance, but primarily Tirado’s book is a narrative about her own experiences feeling spiritually and physically oppressed by poverty.  And that’s great.  I’m not sure there’s another book like this written by someone who’s lived in that world (a world shared by ca. 1/3 of the populace of the United States) for as long as she has, which is part of what makes the book so compelling.

I was very appreciative to have a tour guide whom I could trust to have all the little details right.  And, yes, it’s angering.  It’s bleak and off-putting.  But Tirado has a charming sense of humor, which helps her work go down easier… and, honestly, itshouldn’t go down too easy.  I’d like to think that people better off than Tirado should hate themselves a little while reading her book; couldn’t we have done more to fix things, so that her book would’ve never been written?

I know I didn’t do enough.  I spent many years doing biomedical research; my successes might help wealthy people live a little longer.  But, in terms of maximizing well-being, more research findings aren’t what we need.

Like, okay, the ongoing HIV/AIDS crisis is something I care a lot about, and my father is an infectious disease doctor who has been researching ways to help for years, and has recently begun another research initiative in Kenya that local doctors and scientists will be participating in… but, still, is it possible that economic initiatives could ameliorate the crisis more readily than biomedical research?  Yes.  Definitely.  AIDS is still a big deal in the United States, for instance, but suffering is decidedly correlated with poverty.  If you’re lucky enough to be related to someone who works in the right clinics, you can hear stories about all sorts of people who’ve come up with a raw deal from life, but the few big news stories I’ve seen lately are set in regions of economic blight (e.g. this one, from my own home state of Indiana).

So, thank you Tirado.  I imagine most people already know what ought to be done to fix the issues she’s writing about — some minimum standard of medical care that people can receive debt free, higher wages, more worker protections (like getting rid of “at-will” employment and requiring schedules to be contracted in advance) — so I think it’s great that she wrote her book the way she did.  Specifically, not focusing on what should be done but rather presenting her own experience — which isn’t even as bad as it gets — in all its horrors.

And then, two minor responses.  I wanted to save these for the end because these sound rather like complaints, to me, but they aren’t meant to be.  Her book was good, and these are just two things I thought about while I was reading it.

She writes that the U.S. doesn’t have debtor’s prison anymore.  Just after that sentence, she does acknowledge that people can be thrown into jail for failure to pay court fees, but… how is that not debtor’s prison? Here’s John Oliver on the subject.

Like, yes, you have to be broke and violate a law before you can be thrown in jail, but it’s not really possible to live in the U.S. without violating any laws.  Which is obviously problematic in and of itself.  It’s insane to have a patchwork of laws on the books that people violate every day and then leave it to police officers’ discretion whether or not people will be charged with crimes.

At four miles per hour below the speed limit, though, you’ll get pulled over.  I’ve been stopped numerous times for driving too slowly, even at speeds only one or two miles per hour below posted limits.  And I even drive nice-looking cars!  A dent-free, rain-washed Honda Civic!  Previously a Toyota Avalon that had sufficient internal maladies that I called it “The Torpedo,” but the exterior was fine.  I’ve read that people in decrepit vehicles are pulled over more.

So it’s easy to be stopped by police and charged with something, at which point you’ll have to pay court fees, and if you don’t you’ll go to jail (as is well-documented in The New Jim Crow).  And if you try to avoid going to jail for debt by evading capture (as is depicted in On the Run), you might be executed.

I typically write these essays a few days before they go up.  I’m writing this one on April 9th; yesterday the video was released of another person being murdered without cause by a police officer, this time because he was running away (presumably because he didn’t want to go to jail for unpaid child support, court fees), and… wait, nope.  No “and.”  He was running away, so the police officer shot him, to stop him, then shot him again, and again… then planted a (ineffectual) weapon on the body to justify having murdered the man.  Why, again, would it seem reasonable to trust police officers to use their discretion in choosing which crimes should be punished?

[Note: Tirado has since informed me that the line about the U.S. not having debtor’s prison was meant to be a joke. Which was already pretty clear from her work, i.e. the immediate juxtaposition of that claim with the fact that they’ll lock you up for not paying court fees. But even though it was clear Tirado knows the score, I wrote the preceding paragraphs… how else was I going to work in the horrific idea that dudes are apparently now subject to debtor’s execution?]

The other thing I wanted to mention was, Tirado writes about how poor people generally don’t have time for / feel too exhausted for exercise.  But she also walks a lot, and her work is often physically arduous, much more so than any job I’ve ever held (which, right — I worked in laboratories for a decade, and since then I’ve been writing.  I’ve never had to endure anything worse than a little wrist pain while I was typing a lot and learning to lift a baby many times per day)… so I wanted to toss in a link to Crum and Langer’s study wherein hotel cleaning staff who were told that their day to day work is exercise became healthier. 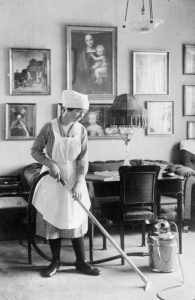 Oops.  Okay, so, minor admission to make on my part.  I’d never read that paper until today — I simply remembered the coverage of it from the popular press — and there might be some, uh, minor problems.  My opinion is that you’d definitely want to conduct a study longer than 30 days to test something like this, especially because there are many wacky treatments that can result in short term weight loss and apparent health gains.  Indeed, another research group attempted to replicate their findings, and also continued the study for a slightly longer period of time — still not long enough if they were reporting a positive result, in my opinion, but they weren’t.  They reported seeing no change in health outcome.  Although they did see a change.  Measured blood pressure went down in their treatment group.

I don’t know if I’ve mentioned this in a previous post, but reading scientific papers can be frustrating.  Normally, I don’t do it.  In general, the way I’ve been trained to engage with scientific papers is to look at the pictures and read the figure legends, then read the abstract, then jot down my own impression next to the abstract.

But I was trained to do that for a small range of fields — nothing much harder than quantum mechanics (“hard” here doesn’t mean “difficult,” btw; my preferred synonym is “intransigent”), nothing much squishier than cellular biology.  Whereas my recent research has covered a wider swath, which means I have to actually read papers, especially a review or two before I look at research results.

And it’s maddening sometimes, looking at a figure and thinking, “Oh, they’ve found this,” but then reading the text and seeing that they’ve stated “We found that.”  I’ve definitely posted a link to this previously, but Emily Willingham has written a very fun guided tour through this type of doublethink.  Or, if you’d prefer your meander through the vagaries of data interpretation be mega-bleak (i.e. about child abuse) instead of rather bleak (i.e. about sexism in academia), one of my own previous posts touches upon this idea as well.

Anyway, my apologies for the digression.  Definitely didn’t mean to go so far off topic!  It’s just that Tirado wrote about walking a lot and also said she doesn’t exercise.  Which reminded me of that study.  But how could I have expected that a high-profile psychology study might have flaws??

p.s. This essay was a bit of a downer, so I scrolled through the archives for an old “Dave vs. Dave” about economic injustice.  Here ya go!