While reading Eula Biss’s On Immunity, I was often reminded of Rebecca Kukla’s Mass Hysteria.  Both works analyze the permeability of bodies, especially mothers and children, while drawing from literature, philosophy, and medicine.  Their major divergence is in tone; Kukla’s work can veer academic (which I enjoy, being a pedantic fuddyduddy myself); Biss’s writing is much more accessible.  A great choice, in my opinion, since Biss seems to have a strong social justice motivation for her work.  The fact that her writing is so consistently chatty and approachable, and that the work as a whole is structured with snack-sized chapters perfect for reading while a napping baby was sprawled atop my chest, seems essential for reaching her intended audience.

I felt the works were most similar in sections discussing putative moral shortcomings in mothers and the way those ills could be passed along to children, either physically through the womb or breastmilk, or psychologically through maternal behavior.  Here’s Biss on the litany of ill-conceived castigations that have been applied to women, which I think of collectively as the “blame the mother” hypotheses:

In the twentieth century, psychologists blamed schizophrenia on overbearing mothers who smothered their children.  Homosexuality, categorized as a mental illness until 1973, was blamed on anxious mothers who coddled their children.  Autism, according to the prevailing theory of the 1950s, was blamed on cold, insensitive “refrigerator mothers.”  Even now, mothers provide “a convenient missing link in germ theory,” as the psychotherapist Janna Malamud Smith observes.  “If it is not viral or bacteria,” she quips, “it must be maternal.”

These are all relatively modern theories — we have to delve slightly deeper into medical history to reach my favorite “blame the mother” hypothesis: the maternal imagination theory that purportedly explained birth defects. 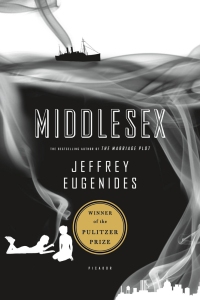 I first learned about this theory from Jeffrey Eugenides’s wonderful novel Middlesex.  If you haven’t read it yet, you’re in for a treat!  As in, why waste your time reading this essay?  Go read his book!  Soon!  Now!

But if you’re still here (I should finish writing this essay, after all, in case you’re at work or something and stuck sitting at a computer), you’ll get only a small taste.

In this passage, Eugenides shows a doctor explaining the causes of birth defects to a nervous expectant mother; the doctor blusters forth with a charming (and in my opinion very true to life) lack of emotional intelligence.  He’s so pleased with his own erudition that he doesn’t even notice the burgeoning worries of his patient — the fearful mother is bearing her brother’s child.

Sourmelina let out an exasperated sigh and wiped her mouth with her napkin.  There was a strained silence.  Dr. Philobosian, pouring himself another glass of wine, rushed in.

“Birth is a fascinating subject.  Take deformities, for instance.  People used to think they were caused by maternal imagination.  During the conjugal act, whatever the mother happened to look at or think about would affect the child.  There’s a story in Damascene about a woman who had a picture of John the Baptist over her bed.  Wearing the traditional hair shirt.  In the throes of passion, the poor woman happened to glance up at this portrait.  Nine months later, her baby was born–furry as a bear!”  The doctor laughed, enjoying himself, sipping more wine.

“That can’t happen, can it?”  Desdemona, suddenly alarmed, wanted to know.

But Dr. Philobosian was on a roll.  “There’s another story about a woman who touched a toad while making love.  Her baby came out with pop eyes and covered with warts.”

“This is in a book you read?” Desdemona’s voice was tight.

“Pare’s On Monsters and Marvels has most of this.  The Church got into it, too.  In his Embryological Sacra, Cangiamilla recommended intra-uterine baptisms.  Suppose you were worried that you might be carrying a monstrous baby.  Well, there was a cure for that.  You simply filled a syringe with holy water and baptized the infant before it was born.”

“Of course not,” said Dr. Philobosian.  “All this nonsense comes from the Dark Ages.  We know now that most birth deformities result from the consanguinity of the parents.”

“From the what?” asked Desdemona.

“Causes all kinds of problems.  Imbecility.  Hemophilia.  Look at the Romanovs.  Look at any royal family.  Mutants, all of them.”

To me, that’s a great medical hypothesis.  Not the idea that consanguinity causes birth defects; that’s too commonly understood, and too true, to be a lot of fun.  But maternal imagination?  A fine piece of work.  Doctors, out of prudishness, refused to examine women’s bodies.  Then, in their ignorance, they claimed those bodies were malleable and consisted primarily of empty space that the women’s organs could migrate through (i.e. “hysteria,” from “hustera” meaning womb, a disease in which the uterus has wandered too far.  Like a parasitic worm, perhaps, if it reaches her brain the womb might cause a woman to say crazy things).  And so they logically assumed, hey, if women’s bodies are such porous, malleable things, and babies are growing inside them, then anything a mother does or even thinks might affect the baby!

Here’s a snippet of Kulka’s perspicacious analysis about how the maternal imagination theory related to the culture of the times:

This cluster of anxieties is sometimes intertwined with other familiar social anxieties that circulate around reproduction.  In a fascinating twist, Sadler warns that the child of an adulteress may still look like her husband because she may have been thinking about him during coitus.  In this case, anxieties about how paternity can be secured intersect with anxieties about the maternal imagination, through the warning that fathers cannot even trust family resemblance as a marker of proper paternity.  This example doubles the call to carefully police women’s appetites: her wayward cravings may betray her husband and her child at once.  Sadler also cites a commonly mentioned report of a woman who “conceived and brought forth an Ethiopian” because she looked at a painting of a black man during conception, thereby adding anxieties surrounding racial purity to the mix of concerns.  Women’s cravings and imagination can thus deform and denature both the kinship order and the racial order, along with the order of their children’s bodies, in ways that normal, external controls over sexual activity cannot prevent.

Tight bind, eh?  If your baby looks “wrong,” it’s your fault: you, as a mother, must’ve somehow sinned.  You saw something you should not have seen.  You ate something you should not have eaten.  You made yourself impure.  And even if your baby looks “right,” there’s a chance that you’re bad anyway, that you somehow cheated and used virtuous thoughts while sinning in order to conceal your crimes.

Here is another passage from Kukla wherein she presents — from an ostensibly-scientific medical text! — a list of maternal-derived illnesses even broader and more morally-castigating than was delineated by Biss:

The seventeenth-century textbooks are particularly concerned about and often organized around the possibility of deformed births, with a special focus on the dangers of the impure, permeated womb.  Sadler’s book, for instance, is organized primarily as a list of ways in which the womb can fail to maintain its purity and its integrity–the womb here leaks and ‘weeps,’ and various ‘corrupt humours’ flow in and out of it, making nothing more ‘perilous’ to the body than the ‘ill-affected womb.’  Many of the works go into elaborate detail, describing and often visually representing famous cases of monstrous births.  Monstrous births could be the product of weak seed or impure blood, of conception during menstruation, of the woman fertilizing herself with her own seed (!), or, most importantly and consistently, of maternal ingestions of sights and substances that could pollute or deform the womb.  In justifying the need for careful knowledge and monitoring of the maternal body, in the preface of his book, Sadler warns us: “From the womb come convulsions, epilepsies, apoplexies, palseys, hecticke fevers, dropsies, malignant ulcers, and to bee short, there is no disease so ill but may proceed from the evil quality of it.” 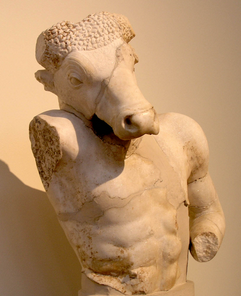 Given that my novel is primarily about violence against women, especially as has been affected in the name of science, I couldn’t resist incorporating the theory of maternal imagination.  For linguistic reasons (and because the traditional myth impugns women and their appetites still further), the problem children in my work are minotaurs.

Surprisingly, the old medical texts do not specifically address monsters from mythology, but it’s not much of a stretch to imagine one of those books containing explicit warnings about women and bestiality.  Or that barns be kept out of the sight line of bedroom windows.  Or that pregnant women stay away from farms in general.  In a time when medical texts posited the sponge-like permeability of women, risk must have seemed to be everywhere.

Of course, doctors could have checked.  Perhaps they would have noticed that human women in all variety of circumstances were giving birth to perfectly normal human babies.

But where’s the fun in that?  And, worse, if it did turn out that women’s thoughts were no more dangerous than men’s, how would you argue that they needed to be shielded from dangers like the pursuit of meaningful professions?