I am obviously thrilled that Jon Krakauer’s Missoula has been getting so much press.  There are still a wide variety of pernicious misperceptions out there, and Krakauer does an excellent job of addressing them in a very accessible format.  I hope lots of people read his book, and, like Nicholas Kristof, encourage their friends and family to read it too.

Until I read Kristof’s editorial, I intended to write an essay highlighting some of David Lisak’s research; one of the most compelling segments of Missoula is where Krakauer describes these findings and the Montana defense attorneys’ attempts to discredit them ad hominem by portraying Lisak as an effete outsider, not to be trusted.  Plus, the re-enactment video that Krakauer and then Kristof in turn call attention to (sadly it’s known as “the Frank tape,” after the pseudonym of the interviewee) is indeed unsettling.

The DVD is entitled “The Undetected Rapist,” and despite being only seven minutes long, depicting Lisak mock interviewing an actor who mimics the lines and delivery of a prior videotaped research subject (obviously it would be unethical for Lisak to release that actual research footage), it comes on its own disc, in its own case, accompanied by a pamphlet emblazoned with large-font warnings on every page: “[This] is a powerful and disturbing DVD which may be triggering for viewers.  Do not watch it alone, and do not show it without a skilled facilitator.”

I watched it alone.  Sans facilitator.  But that warning wasn’t meant for me.  I’m lucky in that I don’t have these particular horrors lodged in my brain for memory to dredge up.  And I’ve already done so much awful research that whatever misery might be sown by the disc has presumably already taken root.  Yes, it’s powerful to see and hear the actor depicting this type of rapist’s doublethink — things like stressing that he targeted extremely naive, inexperienced women, but when describing the culmination of his “conquest” he justifies his actions by saying she’d probably done this thousands of times before, etc. — but that was something I expected.  These people don’t think of themselves as evil.  There is always some justification, some story they can spin to rationalize what they’ve done, if only to themselves. 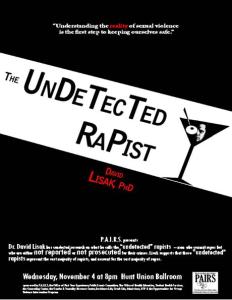 Given that I’ve written several essays about research practices and scientific essays, though, I’d like to draw attention to one quote from the pamphlet that accompanied the DVD.  The pamphlet was prepared by the National Judicial Education Program and includes a question and answer section near the end:

“Q: Did the researcher who conducted the interview tell Frank that he had committed rape?

A: No.  The same federal laws governing the treatment of human subjects in research prohibit a researcher from saying anything to a subject that might significantly change that subject’s view of himself.  In this case, telling Frank that he was a rapist would clearly have been prohibited.”

To me, this is slightly strange.  Not the idea that it’s worth protecting research subjects — that’s vital, and it’s awful, as a scientist, to read about cases where that wasn’t done (one such story you may have heard about is Carl Elliott’s arduous, ongoing struggle to change the University of Minnesota’s research practices, and although Dan Markingson’s death came about due to particularly egregious policies, these problems are definitely not isolated to that university).

Personally, I think the research subject should have been informed.  I can imagine ways that such information could be delivered gently and even therapeutically, with the intent of improving the subject’s future quality of life.  And, to me, it seems like it would be much more devastating for that individual to be shaken of his illusions about his actions by reading a popular press report about that re-enactment video.

Wouldn’t all this press about that re-enactment trigger some recollection for someone who had been interviewed by that David Lisak fellow?  Maybe the doublethink depicted in the video would still prevent the former interviewees from really understanding the ramifications of their actions — there are many new excuses to give, especially excuses involving alcohol, or someone’s mood on one particular night, or an ambiguous relationship with one particular person — but I still think that, if a study’s publicity might convey psychologically unsettling truths, it’s worth the researchers attempting to deliver that information in a therapeutic setting first.

It’s possible that Lisak was unaware that his study would draw so much publicity.  After all, his study was published over a decade now and it wasn’t until I’d read Krakaeur’s book that I walked to the library to borrow that re-enactment DVD.

Which, right, that’s precisely why I’m so thrilled about the existence of Krakaeur’s book and all the press it’s getting.  Because resolving these problems requires so many people’s behavior to change (leaving aside the ideal solution where only one class of people’s behavior changes, i.e. the rapists’): friends, parents, police, district attorneys, juries.  The more people read these books, the more likely we are to have that change.

Honestly, the only complaint I had about Krakaeur’s book was the title.  It seemed to imply that these problems were particular to the named city… but even this complaint was addressed before the end:

“It should be reiterated, moreover, that the deficiencies at the heart of the Missoula imbroglio were not unique to western Montana.  The DOJ investigation identified 350 sexual assaults of women that were reported to the Missoula police during the fifty-two months from January 2008 to May 2012.  The Bureau of Justice Statistics estimated that in 2010, the annual rate of sexual assaults of women in cities with populations under 100,000 was 0.27 percent, which for Missoula equates to 90 female victims per year, or 390 over a period of fifty-two months.  This suggests that, rather than being the nation’s rape capital, Missoula had an incidence of sexual assault that was in fact slightly less than the national average.  That’s the real scandal.”