The prologue to Paul Beatty’s The Sellout is twenty-two pages of absolutely incendiary writing.  The closest literary parallel I can think of is Mark Leyner; Beatty’s writing is hyperkinetic and reference-dense in the vein of Leyner’s “I Was an Infinitely Hot and Dense Dot” or Et Tu, Babe.  Really beautiful, powerful stuff — and better still, beauty & power in service to an idea, writing that forces you to pay attention to something you need to hear.  Leyner’s work is fun, but The Sellout is both fun and meaningful.

So now I’m at the part of the essay where I believe I ought to type “I can’t wait to read the rest!” although this would clearly not be true.  Because I am waiting.  Nobody forces me to write these essays.  I could skip this one, right?  Finish reading?

Except, I can’t.  I can’t because I care deeply about you, dear friend, and want you to have a chance to have all the fun I’m having.  And, who knows?  Maybe nobody told you yet that Paul Beatty’s book is a blast (although, why not?  It’s been described as such in Rolling Stone and the New York Times and presumably numerous other periodicals that happen not to pile up mercilessly on my dining room table until, unread, having been longingly gazed at while the text of Fuzzy Bee & Friends is intoned for the umpteenth time instead, they are schlepped to the recycling bin).

You should read his book.  Here!  Another convenient link!

Okay, now that the public service announcement portion of this essay is over and done with, let’s move on to the show itself: some rambling about the current legality of slavery within the United States of America.

If you’d asked high school me whether or not slavery was legal in the U.S., I would’ve said “nope.”  I was taught that the Thirteenth Amendment abolished it.  And, sure, a meshwork of Jim Crow laws was promptly enacted to provide a replacement evil — the usual statement is nature abhors a vacuum, and perhaps we can imagine that same idea to apply to human nature and a sudden absence of structural horror — but the way I was taught, I had no doubt that slavery itself, extracting labor from shackled right-less human beings, was over. 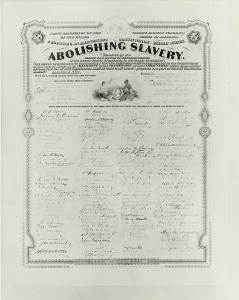 I finally got around to reading the Thirteenth Amendment recently.  The text is rather less forceful than I’d imagined it:

“Neither slavery nor involuntary servitude, except as a punishment for crime whereof the party shall have been duly convicted, shall exist within the United States, or any place subject to their jurisdiction.”

I had no idea that slavery is only conditionally outlawed.  And, okay, maybe you could argue that temporary enslavement of prisoners wasn’t so evil if being convicted of a crime actually meant something.  But huge numbers of people are convicted of being poor.  Is it sensible to consider poverty itself a crime?  Michelle Alexander’s The New Jim Crow and Alice Goffman’s On the Run have anecdotes about people imprisoned for failing to pay court fees, Linda Tirado’s Hand to Mouth has a description of the structural constraints that turn behavior permissible for wealthy people into punishable offenses for the poor, and, from the other side of the political spectrum, there’s this passage from Jessica Silver-Greenberg’s 2011 Wall Street Journal article:

“More than a third of all U.S. states allow borrowers who can’t or won’t pay to be jailed.  Judges have signed off on more than 5,000 such warrants since the start of 2010 in nine counties with a total population of 13.6 million people, according to a tally by The Wall Street Journal of filings in those counties.  Nationwide figures aren’t known because many courts don’t keep track of warrants by alleged offense.  In interviews, 20 judges across the nation said the number of borrowers threatened with arrest in their courtrooms has surged since the financial crisis began.”

And, look — most contemporary coerced labor from U.S. prisoners is a far cry from slavery as was practiced here in the past.  But given a regime in which a racially-targeted undercaste can be locked up simply for debt (e.g., our own), extracting any labor from prisoners at sub-market wages is damningly unethical. 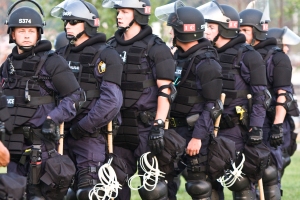 Police officers in this country are allowed to accost and search people whenever they feel “thoroughly suspicious,” and there are rarely repercussions against officers who plant evidence or levy fraudulent charges of “resisting arrest,” and the police are allowed to use racial cues to target individuals — in L.A. vs. Lyons the Supreme Court ruled that even though brown skin increased someone’s odds of being subject to mistreatment, statistical standing is insufficient for a legal challenge.  All of which means that it is very possible for totally innocent people to be convicted, and an enriched population of those people in this country are black… but because they’ve been convicted, enslavement is permissible!

And, sure, you might imagine that the equal protection clause of the Fourteenth Amendment would keep people safe where the Thirteenth fails — if black people are preferentially targeted for unjust imprisonment, that doesn’t sound much like equal protection.  The legal trickery here is that the aggrieved persons are all convicted based on the unique details of their crimes, which ostensibly justifies that the process is fair.  But there are plenty of unfair ways to enact policies that posses a veneer of equitability.

Even if today all police officers were replaced with race-blind justice-seeking robots that were deployed across the country with a local density that reflected how much “crime” transpired in each square mile the year before — which definitely sounds like it would fulfill the Fourteenth Amendment — because past abuses resulted in a greater percentage of crimes committed being documented for some people than others, and the justice-bots’ deployment would ensure that the same unequal fraction of crimes would be caught in the future, we would perpetuate our current racial inequalities.

Until we have clear documentation as to exactly what behavior will be punished in the United States, and we commit to punishing allsuch infractions, and we ensure that actions taken by all people bear an equal likelihood of incurring punishment, our justice system is a sham.  I still get angry looking at speed limit signs — I think the signs should post the actual speed that would incur a traffic stop on each road, and that the police should stop any and all people that exceed that speed.  It’s human nature to abuse discretion, and I think we all have plenty of evidence that our nation’s police officers do not rise above human nature to treat people equally.  Instead, discretion has led to situations like the racially-motivated use of civil forfeiture (which I wrote about here).

But, right, that’s all relevant to people suddenly being considered prisoners.  Convicts.  For imprisonment to be even vaguely analogous to slavery, the people thus treated would have to be working without fair pay.  It seems rare that prisoners are forced to work (there are a few stories about people threatened with time in solitary if they won’t work, and according to a buddy of mine, a brilliant dude who got his GED at San Quentin, solitary is decidedly un-fun.  Un-fun to a coercion-type degree.  Cut a human off from the world and it’ll start to go bonkers; it’s apparently excruciating to feel yourself drying up inside).

But the problem is, if a country locks people up for not having money, they have to work.  If they don’t make money, they’ll get locked up again.  And that’s why it’s so unethical to pay prisoners below-market-value wages.

If you look up UNICOR, a company that mediates a lot of prison labor, you’ll see that they stress the work is both voluntary and adequately-paid: “Inmates must be paid at a rate ‘not less than that paid for work of a similar nature in the locality in which the work is performed.’ ”  But that legal constraint would only be meaningful if prisoners were working alongside free laborers.  Since they almost never are, there won’t be a wage standard for work of a similar nature, which means it’s legal to compensate them with only piddling amounts.

And that’s not even accounting for the monetary extortion prisoners are subject to.  They’re charged huge amounts to use telephones, despite numerous studies that have shown that for the (innocent) children of inmates, reliable telephone contact is one of the single biggest factors determining the children’s eventual outcomes in life.

And then there are issues with the type of work prisoners are offered… let’s just keep this brief and state that it’s work most people would rather not do.

All of which is to say… really, Thirteenth Amendment?  I thought you were offering so much more!

p.s. Since typing this essay, I’ve finished reading Beatty’s book.  And here it may be appropriate to cite Adam Sternbergh’s New York Times article about Mark Leyner: “He started writing fiction while at Brandeis, where an early mentor, Alan Lelchuk, praised his very first piece to the class, then told Leyner, ‘There’s no way you’ll be able to keep that up.’ ”  Or, earlier in that article is a quote from Lev Grossman: “I always kind of imagined Leyner having finally collapsed in on himself, becoming a neutron star or a black hole.  Because, my God — who could keep up writing like that?”

I really enjoy that style of madcap comedic writing, but I’ve generally found Leyner’s novels to fizzle by the end — the early pages burn so brightly that the ideas run out of fuel earlier than a reader might like.

I would still wholeheartedly recommend Paul Beatty’s book to you — I think his book lives up to the prologue’s promise a lot better than other works like this — but not all the book is as good as those initial pages.  Still, he sets himself an incredibly high bar; I’ll close this essay with a passage from his book, and hopefully that’ll be enough to get you to go out and read it:

The film inside my head begins to skip and sputter.  The sound cuts out, and protesters falling like dominoes in Selma, Alabama, begin to look like Keystone Negroes slipping en masse on an affirmative-action banana peel and tumbling to the street, a tangled mess of legs and dreams akimbo.  The marchers on Washington become civil rights zombies, one hundred thousand strong, somnambulating lockstep onto the mall, stretching out their stiff, needy fingers for their pound of flesh.  The head zombie looks exhausted from being raised from the dead every time someone wants to make a point about what black people should and shouldn’t do, can and cannot have.  He doesn’t know the mic is on, and under his breath he confesses that if he’d only tasted that unsweetened swill that passed for iced tea at the segregated lunch counters in the South he would’ve called the whole civil rights thing off.  Before the boycotts, the beatings, and the killings.  He places a can of diet soda on the podium.  “Things go better with Coke,” he says.  “It’s the real thing!”