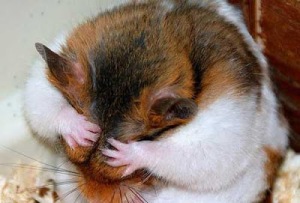 I recently read a cute article by Emily Underwood, “How to tell if your hamster is happy.” There is an easy answer, too.  The hamsters in question are research animals, so the answer is, “No, they probably are not.”  Of all the research animals I’ve interacted with, the only one that seemed happy was the narcoleptic dog, and it was no longer being used for any experiments.

Most experiments seem not fun for the animals.  Simply being around researchers induces significant stress, even if those “researchers” are just cardboard simulacra of celebrities, and especially if those researchers-are-flesh and blood masculine-scent-wafting males.  A lot of published research on stress and pain and such is probably incorrect because the controls used for the experiments, non-tormented animals that still lived in an animal facility and interacted with researchers, were also experiencing duress.

But the experiment discussed in Underwood’s article still has useful things to teach us, in part because I don’t think the essential message is really about happiness at all.  I think their experiment is best interpreted as an investigation into the neurological consequences of poverty.

In humans, there’s been a recent effort to document the ways that childhood poverty changes a brain.  These aren’t experiments; aside from those twins in Colombia, nobody is being scooped out of their middle-class family and instead raised in poverty.  But the evidence from retrospective analysis suggests that poverty has long-term effects on brain structure and, therefore, on behavior.

And the results of the new hamster study match what you’d expect based on the human results.

Here’s a quick summary: hamsters were either raised in standard cages or in “enriched” environments — at the beginning of the study they all had their crappy cages with access to water and dry rodent pellets, a running wheel, a cardboard tube, and twice-weekly handling (two to a cage, at least, so they did have some companionship).  Then they were briefly given access to a wide variety of fun hamster toys (Gnaw sticks!  Hamster huts!  A suspended hamster tent!  An upgraded running wheel!).

After the hamsters learned what the toys were (& that they were a blast), enrichment was taken away from half of them.  These were the impoverished hamsters.  Previous exposure to luxury ensured that these hamsters would mirror Robert Frank’s ideas about wealth, that our perceived wealth depends primarily upon the lifestyle of those around us: the hamsters needed to learn about the great toys to know that they were poor for not having them.

Then the experiment began.  The hamsters knew that researchers generally put sweet-tasting water in a bottle at the left of a test cage and foul-tasting water to the right.  They would then scoop up either privileged or impoverished hamsters and drop them into the test cage with a bottle set up at an ambiguous middle position.

And it’s important to keep this kind of result in mind when considering our world.  Inequality in upbringing is so severe that we’re engendering massive neurological differences between people… while they are still children.  It clearly isn’t a child’s fault that he or she was born into a poor household as opposed to a wealthy one, but that child, and that child’s future children, and so on, will suffer the consequences.

Which is very clear in my own life.  Because I am writing full time, we live very austerely — we are supporting our family, and trying to help K’s father, on a single public schoolteacher’s salary.  Most of our calories come from rice and dried beans.  Our furniture was liberated from collegiate dumpsters.  Our entertainment budget is nil. 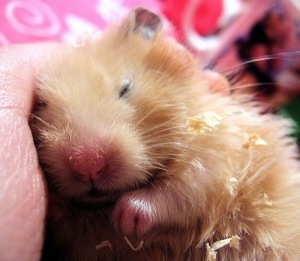 But that’s of little consequence because my family is rich, I was raised wealthy, and my brain has already established privileged patterns of thought.  The austerity clearly isn’t poverty for us because we bring in more money than we want to spend, even though our income level is below some other families’ who feel poor.

What’s more impressive to me is that K is so happy living this way.  She did not grow up wealthy, but she has as much emotional resilience as I do.  Or, no.  Let’s face it: she is more emotionally robust.  Even our friend whose radiologist was able to read her ribs like rings of a tree (“See this, here?  This shows when your family didn’t have enough to eat”) has the can-do I’ll-try-my-best-even-if-I-might-fail attitude people normally associate with growing up rich.

Of course, that’s true with the hamsters, too.  Yes, there is a difference between how adventurous impoverished hamsters and rich hamsters become, but the error bars are still big — there’s still a lot of variation between individuals.  Some hamsters overcome.  Our friend would’ve been one of those unvanquished hamsters.