My apologies to anyone who has been stuck driving behind me recently.

It can be frustrating.  It feels slow.  Pickup trucks & SUVs sometimes whip around to pass me on residential streets.  2 mph below the speed limit!  Although that is legal driving. Whereas speeds even 1 mph above a posted limit are illegal.

The habit of driving at or above speed limits is so ingrained in most people’s minds that Kwame Anthony Appiah recently joked in the New York Times that the police don’t want to be alerted if you’re stuck behind someone driving 2 mph below the speed limit ... this in a column about drawing attention to illegal driving practices.  Which upset me, but I just trawled through the comments for that article and it seems that no one else noticed or cared.

I’ve been attempting to actually follow traffic laws as an ineffectual form of protest.

It’s dangerous to have laws that nearly everyone routinely violates.  Police officers, who as a class have shown themselves to be rather imperfect arbiters of fairness, are thereby given free reign to harass anyone they’d like.  I like Kenneth Nunn’s phrase “surplus criminality,” which I first encountered in his article “Race, Crime, and the Pool of Surplus Criminality: Or Why the ‘War on Drugs’ was a ‘War on Blacks.’ “  A pool of criminals is harbored at all times & can be punished whenever circumstance demands, perhaps to quell social unrest, perhaps to raise money.

The problem is, if an activity that a wide range of people engage in is technically illegal, police officers are given discretion to selectively enforce those laws.  And the targets of their harassment will generally be met with very little sympathy… because they were doing something illegal, after all.  Those people are criminals. 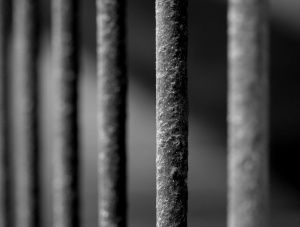 Criminals are one of the few remaining minorities for which it’s still common for reasonably-informed people to claim that they chose to be who they are.  I volunteer with an organization that ships free books to inmates, and after I’ve put together a package of books for someone I’ll often look that person up to be certain I have the correct address… the search page always displays a very unflattering photograph and a list of convictions.  Often the convictions are for “crimes” in which no one was harmed (absurd lengths of time for drug possession).  I’ve sent books to a number of people convicted of crimes of poverty (if you steal small sums of money because you’re trying to survive & get caught, we lock you away for a long time.  But if you steal huge amounts of money because you’re a self-important greedhead, your only punishment will typically be paying back a fraction of the money you stole… Bernie Madoff’s case was a rare exception).  But sometimes inmates were convicted of murder, and even I reflexively shake my head and whisper “Shouldn’t kill people, dude,” before sending him some books.

And I should know better than to respond that way.  The address lookup page never tells you any particulars.  It won’t tell you if someone was living in a district where the police routinely plant evidence on people.  It won’t tell you the particulars of a crime — for instance CeCe McDonald was locked up for manslaughter after a besodden & belligerent neo-Nazi chased her and impaled himself on her hairdressing scissors.  It certainly won’t tell you anything about the person’s life — how was that person treated for all those years before snapping and doing something regrettable?

But our prejudices against criminals are deep-set — my middle & high schools, like most people’s, had plenty of burly young men with impulse control problems who might shove me into lockers while walking down the hall.  And it’s easy to think that those dudes were jerks & they grew up and kept being jerks & finally got what they deserved.

At the time, I certainly never thought about how lucky I was to be living in my parents’ home instead of in those kids’.

I slapped up a post a little while ago recommending that you find time to read the prologue of Paul Beatty’s The Sellout, but let me quote another passage from the book… both highly relevant to this point & beautifully written.

[The warden] dangles a handcuff key in my face and, with one thick hairless arm, hoists me upright, scooting my chair in so close to the table that I can see my suit and tie’s reflection in its shiny, lemony-fresh mahogany finish.  I’ve never worn a suit before, and the man who sold me this one said, “You’re going to like the way you look.  I guarantee it.”  But the face in the table staring back at me looks like what any business-suit-wearing, cornrowed, dreadlocked, bald-headed, corporate Afro’d black man whose name you don’t know and whose face you don’t recognize looks like–he looks like a criminal.

Once someone has been stopped, that person is already well on his or her way toward being considered a criminal.  Police officers are allowed to steal from people they stop as long as they suspect that cash on hand might later be used to buy drugs, or that an ipod was bought with money that was once used in drug transactions, at which point the victim of police theft is required to file a suit and prove innocence beyond a reasonable doubt to reclaim the property (yay civil forfeiture!).

Or totally innocuous objects might result in arrest.  Do you ever drink through a straw?  Well, did you know that some people somewhere also use straws in the drug trade?  Which means possession of a straw might get you locked away: you should read the harrowing story in the New York Times Magazine about Tyrone Tomlin serving 21 days in Rikers for possession of a soda straw.

And, yes, I realize that I’m not really accomplishing anything by driving slowly.  Given the discretion police officers currently have in choosing whom to target for enforcement, we might still have all the same problems if traffic laws were changed to match how people actually drive.  But changing traffic laws is a necessary first step toward fixing the problem.  Posted speed limits, for instance, should denote the behavior that will actually be treated as criminal — if officers won’t stop people unless they’re driving 38 mph in a 30 mph zone, the number 38 should be posted, not 30.  And everyone driving at the illegal speed should be stopped.

Otherwise we’ll be stuck with our current system in which police can choose to enforce laws selectively against those who “look like criminals.”  And, as Beatty eloquently described, our media is saturated with images and depictions that leave all people, blacks and whites alike, with a subconscious association between young black men and criminals.