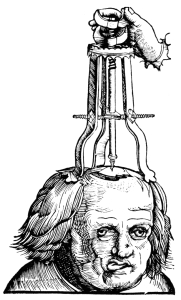 Back when doctors were curing headaches by drilling holes through people’s skulls, or slapping on a few leeches to drain out the bad blood when sick patients came stumbling through the door, medical spending wasn’t a big deal.  There weren’t any serious political considerations attached.  If you were wealthy, you might visit a doctor and get yourself killed.  If you were poor, you’d probably go without medical care.  You’d live or die according to the virulence of your disease and the quality of your diet.  Maybe you’d buy a small amulet representing one of the healing saints, or pay a witch to bury herbs in an auspicious location near your house.

I haven’t done an extensive review of the historical data, but to the best of my knowledge no ancient kingdoms were bankrupted trying to provide leeches to all their sick citizens.

There are dramatic economic consequences of improved medical care, though.  Leeches and bloodletting and trapanation were ineffectual, but they were cheap.  Modern medical care actually saves people’s lives, but it comes at a huge cost.  In the United States, health care spending is about a fifth of the total economy, and rising.

Death is scary.  For people who started learning philosophy with Camus (which is not something I’d recommend — this can result in an excessively bleak world view and is probably appropriate only for incurable depressives), inescapable death seems to be the major quandary in our attempt to ascribe meaning to life.

The fear of death fuels medical spending.  Also our spending on biomedical research.  Medical care is pretty great currently, especially if you’re comparing statins and anti-retrovirals and insulin to leeches.  But people still die.  We haven’t reached the singularity yet (thank goodness). 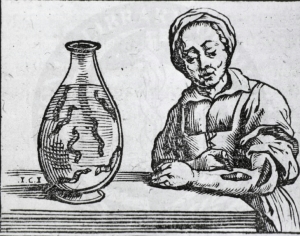 Biomedical research spending makes the population as a whole sicker, though.  Most research innovations — and certainly the most lucrative ones — are for managing chronic conditions, not curing them.  People who would’ve died — how many leeches do we prescribe for atrial fibrillation? — survive instead, lowering our population’s average health.  And raises average age, since those first few maladies aren’t killing people as often.

It’s not so difficult to imagine that, if these biomedical research trends continue, people might survive until a hundred and fifty, maybe two hundred years old … and health care spending will rise until it’s a third of the U.S. economy, or fifty percent, or more.

That could doom the country.

But the real tragedy, to my mind, is the way that health care money is being spent.

I think a passage from Damon Tweedy’s Black Man in a White Coat gives an elegant summary of the problem.  The whole book is great — I’d highly recommend it to anyone who cares about either racial inequality or the U.S. medical industry.  Tweedy’s writing is so compassionate, always looking to describe the best in people even when his narrative compels him to shown them at their worst.

The passage I want to quote appears just after Tweedy describes a preventable medical tragedy brought on by poor lifestyle choices.  Tweedy grabs a hasty meal with some of his colleagues and is still mulling over what more could’ve been done to help the patient.  Ironically, this leads to a conversation about counseling patients to eat better, but Tweedy and the other doctors are scarfing extremely unhealthful meals.

It really is a great book — big-hearted and earnest, with Tweedy always clear-eyed about his own failings.  His descriptions of his own struggles with poor lifestyle choices really dramatize his efforts to address other black men’s unhealthy lifestyles.

(Oh, and, I fixed a minor typographical error in the following quote without marking it — I always think  sic erat scriptum sounds snarky, and Tweedy’s book was good enough that I’d feel like a total jerk if I made him look bad for what was probably someone else’s mistake.)

I asked them their thoughts on counseling patients about nutrition and exercise.

“That’s the responsibility of his outpatient primary care doctor,” he said.  “We’re here to deal with the life-and-death stuff.”

This focus on biomedical treatment over preventative care is not limited to Duke or similar schools.  Indeed, outpatient primary care physicians — the doctors that Mike felt bore the responsibility for counseling patients on diet and exercise — are often no more inclined than other doctors to have this discussion, even for diseases where these interventions are vital.  There are many barriers, among them money (dietary counseling is reimbursed poorly compared to medical procedures), time (physicians often see patients every ten or fifteen minutes), and the sense that nutrition talk is better left to dieticians, and that doctors should focus on their expertise (prescribing medications, interpreting tests, and performing procedures).  In addition, experience has made many doctors cynical about patient behavior and the likelihood for change.

The tragedy of U.S. health care spending isn’t just that we shovel too much money into it, which limits what we can spend on other, more important causes, but also that we pour huge sums of money into end-stage therapies that don’t increase quality of life nearly as much as cheaper, earlier interventions.

My father-in-law’s treatment is a great example.  By the end of his life, the federal government was spending hundreds of thousands on his care.  Medication for cholesterol and diabetes, high-tech surgery to replace arteries & restore nervous function in his hands after they’d been numbed by diabetic neuropathy, installing an internal defibrillator once his heart began to fail…

Those treatments helped.  Sure.  They kept him alive longer.  He was incredibly happy after the hand surgery — for months he’d been unable to play guitar because he couldn’t feel anything and could barely exert enough pressure to fret the strings, and after that surgery he could play again, invited everyone he knew for another potluck & jam session.

When K dropped her father off after that surgery, she realized our government’s medical spending on him was actually helping dozens of people — all his neighbors were outside waiting to greet him, and once he could use his hands well enough to cook again he resumed baking loaf after loaf of sourdough bread to give to them.

At the same time, our government could’ve brought K’s father — and everyone he helped — more joy by helping him earlier.  They spent nothing on him until his untreated conditions left him too disabled to work.  Only then, and even more so after he reached sixty-five, could he get help.

It’s crummy knowing that he would’ve been happier, and would’ve been able to give more back to his community, if he’d been helped earlier.  His childhood was rotten, but nothing was spent to overcome the scars left from hostile parenting.  Our government didn’t help him get counseling after a traumatic event in his early adulthood, either, and that was the root of so many of his later problems.  A few thousand spent to help him then could’ve kept him from becoming indigent. A few thousand spent on psychiatric counseling then would’ve staved off the need for the hundreds of thousands in medical care that were provided later.

This bizarre state of spending priorities is reflected very clearly in our federal budget.  For instance, there’s no money set aside for universal pre-K education.  This would only cost on the order of $10 billion dollars, though, whereas we spend something like $500 billion on health care for the elderly.  But if our goal is to produce good health, childhood education accomplishes much more than surgery and pharmaceuticals for the elderly.

As Tweedy wrote, simply teaching people to eat better would obviate the need for a significant percentage of our medical spending.  Maybe we’d need to spend some money subsidizing real food so that a better diet was within more people’s reach, but, still… that’s much cheaper than the life-and-death medical care that Tweedy was trained to provide.

After an education worth some hundred thousand dollars, after two decades of hard work & studying on his part, Tweedy served as part of a care team working arduous thirty-hour shifts … all to save people who might’ve stayed away from the hospital entirely if they’d been eating vegetables.