Over the course of ten days in March, our weather in Bloomington careened from the mid-seventies down to the teens with a few inches of blustery snow.  Twice!  Two sudden spells of unexpected summer, two of icy winter.

I do a lot of walking on evenings and weekends, and during that month I was often inappropriately dressed.  Shivering or sweating.

Bloomington is located at the midpoint between two major air currents, one from the south that carries warm wet gulf weather, one from the north that brings dry polar air.  We skip a lot of the mild in-between temperatures that people associate with spring or fall.  Instead, our weather flops back and forth between mirroring balmy Kentucky or blustery upper Michigan.

In science, this sort of phenomenon is called “bistability.”  Something like temperature, which seems like it could slide around gradually, instead lurches from one state to the next.

A buddy of mine explained why he never touched the stuff this way: “I realized that every time I’d drink, I’d end up with a needle sticking out of my arm.”

Or there’s the more common example of a light switch.  Unless you install a dimmer, the room suddenly flips from dim to bright when the wall switch crosses its midpoint.

The input — the position of the switch — moves fluidly through space when you flick it.  Its height takes on all the intermediate values.  The output — brightness of the room — does not.  One moment, the room is dark.  The next, there is light.

First, the importance.  In addition to weather systems and alcoholic binges and the working of common electronics, bistability rules our brains.  Your brain contains some hundred billion spidery cells called neurons, and your thoughts happen when these neurons begin “firing” in a particular pattern.  Each neuron is like a machine that collects information at one end and sends a message at the other.  The messages are bland, though.  Each message is either sent or not.  That message is called “firing.”

(To a rough approximation, at least — imagine interacting with a dog that only knows one word, “woof.”  It can still convey slightly different information by saying “woof” at different rates.  You might respond differently if you heard your dog say “woof” once versus saying “woof” every three seconds for a minute.  Similarly, neurons can convey different messages with different rates of firing.)

Each neuron is bistable.  Pulse.  No pulse.  Just like a light.  The room is dark.  The room is light.  If you were fifteen & at boarding school, maybe you’d have a lightswitch rave.  “B., you stand there and toggle it, we’ll dance.”  With no intermediate brightness, the flickering makes everyone disoriented.  You’d hardly need drugs!  Except, if you were fifteen & at boarding school, you’d probably have little trouble finding drugs. 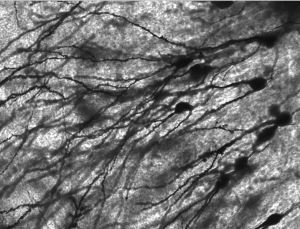 Neurons are similarly switchlike because the act of firing also causes firing.  Once a threshold is crossed, the behavior feeds itself.  Having a drink makes our beleaguered alcoholic want to have a drink.

And bistability pops up in many other fields.  In economics, the rich get richer and the poor get poorer.  Having money makes it easier to get money.  In astronomy, lonely matter becomes more thoroughly alone.  Empty space expands faster than regions with mass, creating isolated pockets of stuff.  In either case, we end with rampant inequality.  You’ll have a lot of money, or none; you’ll have many neighbors, or none.  Bistability carves out the middle.

I think it’s important for all of us to learn a little about bistability because the knowledge engenders a much-needed skepticism when reading about climate change.  Although when many others write sentences that include both “climate change” and “skepticism” they mean that we should not be afraid.  My point is that we should be more afraid.

At the Paris meeting, many countries agreed that we should try to prevent temperatures from climbing more than 2 degrees.  The assumption being that a 2 degree change will leave us safe.

The problem is that our world’s climate is in many ways like a light switch.  Sans dimmer.  As our weather changes, plant growth will be affected, which will change the rate at which plants hoover gases out of the atmosphere.  A crude guess is: hot weather, fewer plants, less carbon pulled from the air by plants, even hotter weather in the future.

Or hot weather might melt arctic ice, and that new influx of water could change the pattern of underwater currents.  This would leave many people upset.  If western Europe weren’t in the path of a steady flow of northbound tropic water, it’d be much colder.  “Global warming” can cause local temperatures to plummet.

And the melting ice would cause Miami to disappear.  Maybe parts of New York City.

The devilish thing about bistability?  Tiny misunderstandings lead to huge mistakes in our predictions.  If someone holds a dimmer switch midway up, you can probably guess how bright the room will be.  “Medium bright!”  With a standard switch, you would have much less confidence in your prediction.  Let’s say you’re cooking dinner.  If a toddler climbs up on a chair and starts fiddling with the light switch, claiming she’ll only move it “a little bit,” do you expect the room to stay lit?

Global climate has such nonlinear inputs that it should be no easier to predict.  It’s hard to put much confidence in anyone’s claiming to know what will happen if temperatures change 2 degrees, or 1.5 degrees, or 4 degrees…

That said, there’s plenty we can do.  Us regular people can make a difference without involving any politicians, just by thinking about what we eat.  The “big dream” goal is to cut emissions by 60% to 80%.  But animal agriculture accounts for somewhere between 10% to 50% of global emissions. (The low end of that range was estimated using outdated numbers for farm animals and assuming that cows don’t breath — the high end is equally unrealistic because it assumes all our farm animals would instantly disappear with their grazing land reverting to natural forests.)  Eat more vegetables for dinner and you’re already making a big change.