When my family plays sports, every game is vaguely reminiscent of Calvinball.  The rules are amorphous.  Peculiarities of the landscape are considered features of play.  And, if you’re losing, tackling often seems as though it ought to be allowed.

Recently we were playing a soccer-esque game with a good friend who, unfortunately, lived through atrocious violence.  She was winning, I thought, although it is often difficult to know.  Less contentious was the fact that I was losing.  Time for a tackle!

If you saw a tickertape of her thoughts during the game it might’ve read fun fun fun TERROR!

I apologized profusely.  As someone who has not been exposed to horrible trauma, I am at times blithely unaware of the delicate tightrope walked by others.  There is at times a fine line separating play from something that will trigger the fear. 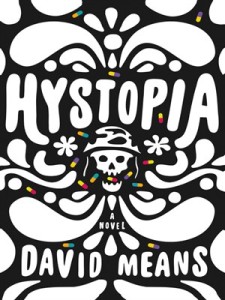 In Hystopia, David Means tells the story of a Vietnam veteran who returned from combat, wrote a fantasy novel about a pharmacological cure for trauma, then killed himself.  The novel — which transpires in a Man in the High Castle-esque alternate reality — is bleak.  The novel within the novel is even bleaker.

The doomed writer is young, a sensitive kid named Eugene Allen.  And one striking feature of the novel within the novel is the way Allen couches fantastical wizardry in scientific-sounding language.  This gives readers a sense of how ardently he wants his imagined cure to be plausible.  Writing that a spell could cause selective amnesia would make clear that his mind, the writer’s, would be forever filled with horror.  But by writing that a pill could do it, it was possible for Allen to imagine his own salvation.

It’s true that Allen’s use of scientific terminology is often flawed.  His education was interrupted by the war — at an age when I was in college, he was experiencing the peculiar blend of boredom and terror that characterizes modern war, watching his friends die, trying to murder strangers who were trying to murder him in turn.  Allen knows that the world ought to be scientific, but he was never given an opportunity to learn the details of what that means.  And so the text is peppered with words that he thinks will give his world the appropriate atmosphere, like in this passage where a government agent is daydreaming about the beach during a meeting with his supervisor:

It was the only memory he had, everything after that moment — leaving school — came up blank and here was Klein, he was still talking, pressing, asking him what he was thinking about, so Singleton said, “The Credo, sir, I was thinking about the Credo,” while in his mind he was running out of the Corps building and Wendy was waiting, arms wide, and then he was on the beach with her, applying lotion as an excuse to touch her back, two fingers pressed together tracing the lovely line of her spine to where the taut band of her bikini bottom stretched over a slight gap that absorbed sunlight like antimatter.

It’s a vivid piece of imagery, and, given what readers know about Allen’s education, it hardly matters that the combination of scientific-sounding words punctuating the passage make no sense together.  His essential point is made.  Unlike Tolkien, who returned from combat after World War I and composed a trilogy with dragons and elves and spells, veterans returning from the Vietnam War to the U.S., a country obsessed with science, technology, and progress, could not so easily slip into magical fantasy.

There are many passages that would fit either type of novel — magical or faux-scientific — like the following in which a character explains to his amnesiotic girlfriend that cold water will trigger her memory’s return:

What we want to do is get more of you back, to take you into the water and get you in the cold — not much, just a bit — and start to get some of your memories back.

It’s easy for me to imagine a mystical world in which wizardry could be counteracted by immersion in cold water.  It was nothing but water, after all, that Dorothy used to defeat the Wicked Witch.  And the type of memory loss Allen imagines is quite similar to that of ancient mythology.  Shortly after using an old military hand signal, a soldier who’d been cured of his PTSD finds himself thinking that his faculties will come back to him when he needs them:

Back behind the wheel she drove quietly and carefully and continued thinking, he guessed, about her father’s chances.  At least the old man could remember his combat training.  Some said — and this might just be one more of the countless rumors, of course — that the mechanics, the fighting techniques, the useful stuff could never be lost, because it was somehow entwined into your sense of destiny (something like that).  It was all tiresome.  Rumors appeared around a context of need; they were nothing but a formation of an idea around a precise desire.

This resembles the legendary monkey Hanuman’s memory loss in the Ramayana.  Back when the monkey knew how powerful he was, he took advantage of his abilities.  He was a menace!  He had to be stopped!  But, like a returned-soldier-turned-government-agent, his powers might be needed in the future.  He needed to forget that he’d been trained, without forgetting the training itself:

Having obtained boons Hanuman became highly and powerful and accelerated in himself.  He became full like ocean, O’ Rama.

Having become powerful, the best of Mongoloids, started committing offences against Maharsis in their hermitages.

He broke the sacrificial ladles and vessels and also the heaps of banks belonging to the ascetics.

That powerful Hanuman did all this type of jobs.  He was made invulnerable to all kinds of weapons by Siva.

Having known this all the Rsis tolerated him, the son of Kesari and Anjana.

Even though prohibited by his father, Hanuman crossed the limits which enraged the Rsis of the lines of Bhrgu and Angira and bestowed curse upon him.  O best of the Raghus.

That you will be unconscious of the prowess endowed with which you torment us.  You will be conscious of your power only after being reminded of it.

Thereupon, having devoid of prowess and glory, he used to wander in the hermitages silently and decently.

There is a long tradition of magical speculation about treating warriors with selective amnesia.  But Allen couches his speculations in faux-scientific language in order to give himself hope.  By writing that way — especially within the alternate reality Means created for him — he could more easily imagine an escape from his own pain.

Other features of his writing reveal Allen’s youth.  His language is playful, but much of the play revolves around reversing clichés, in lines like “I was thinking how alive I am because I’m lucky” and “I believe that man’s drinking under the influence of driving, Rake was saying, pulling the car over to the shoulder.” 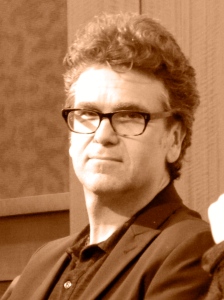 These untrained features of Allen’s writing further Means’s message: kids were yanked from their lives & sent overseas to murder and be murdered instead of developing into adulthood.  Many never returned.  Of those who did survive, many were sufficiently traumatized by the experience that their lives were never as successful as they would’ve been.

Even now, several wars later, our soldiers return to a world where few efforts are made to care for them.  We make token expressions of gratitude on Memorial Day without structuring our world to actually accommodate those who have sacrificed on our behalf.  The suicide rate among veterans is heartbreaking.  The number of homeless veterans is heartbreaking.  The number of veterans whose only institutional care comes from the criminal justice system… that’s heartbreaking, too.

The phrase “Thank you for your service” doesn’t mean much unless we’re willing to change our world such that returning veterans actually feel thanked.  Hollow words aren’t helping much.