So-called libertarian economic philosophy — which has been having a larger and larger influence on mainstream politics over the past few decades — doesn’t make sense.  Which is too bad.  I like the basic ideas behind capitalism.

And I love liberty.

But there are major logical inconsistencies in the popular conception of free market capitalism.

Economist Robert Reich recently published Saving Capitalism to address some of these misconceptions.  In the first few pages of his book, he dismisses the distinction between free markets and government intervention:

The question typically left to debate is how much intervention is warranted.  Conservatives want a smaller government and less intervention; liberals want a larger and more activist government.  This has become the interminable debate, the bone of contention that splits left from right in America and in much of the rest of the capitalist world.

But the prevailing view, as well as the debate it has spawned, is utterly false.  There can be no “free market” without government.  The “free market” does not exist in the wilds beyond the reach of civilization.  Competition in the wild is a contest for survival in which the largest and strongest typically win.  Civilization, by contrast, is defined by rules; rules create markets, and governments generate the rules.

A market — any market — requires that government make and enforce the rules of the game.  In most modern democracies, such rules emanate from legislatures, administrative agencies, and courts.  Government doesn’t “intrude” on the “free market.”  It creates the market.

This is, sadly, not what would happen in a world free of government intervention.

Instead, roving warlords would conquer the oil reserves.  Or the refinery.  There would be no money, so oil would have to be bartered for other goods.  But someone bringing huge quantities of oil to the market would likely be murdered, their possessions stolen.  It would be difficult to maintain inequality as extreme as we have in the contemporary United States, because the wealthy would pay huge sums to employ bodyguards.  Greater concentrations of wealth would lure greater extremes of violence.

But this is not the world that self-proclaimed libertarians envision.  Instead they support rules that favor the already wealthy; they claim that the peculiar set of rules they favor is free-market capitalism.  It is not.

This contrast is lucidly described in a passage from Matthew Desmond’s Evicted.  He focuses on the housing rental market, but his analysis applies equally well to many realms of our economy:

Those who profit from the current situation — and those indifferent to it — will say that the housing market should be left alone to regulate itself.  They don’t really mean that.  Exploitation within the housing market relies on government support.  It is the government that legitimizes and defends landlords’ right to charge as much as they want; that subsidizes the construction of high-end apartments, bidding up rents and leaving the poor with even fewer options; that pays landlords when a family cannot, through onetime or ongoing housing assistance; that forcibly removes a family at landlords’ request by dispatching armed law enforcement officers; and that records and publicizes evictions, as a service to landlords and debt collection agencies.  Just as the police and the prison have worked to triage the ill effects of rising joblessness in the inner city (like social unrest or the growth of the underground economy), civil courts, sheriff deputies, and homeless shelters manage the fallout of rising housing costs among the urban poor and the privatization of the low-income housing market.

Without government intervention, the plight of the urban poor would not be nearly so miserable as it is today.  Landlords could not stake claims to huge numbers of properties throughout a city, because the impoverished would simply claim a place to live and retaliate with violence if a landlord asked them to leave.

This is the basic reason why I support progressive income taxes (and progressive wealth taxes, too).  I think that people should fund government to the extent that their life would become worse without it.  The poor are kept poor by our existing rules.  They cannot take the things they need.  I think they should pay a negative tax, i.e. receive an income supplement.  The wealthier someone is, the more likely that person would be murdered and robbed without the protections of government.  I think it is eminently reasonable for the wealthy to pay a higher percentage to maintain our current order. 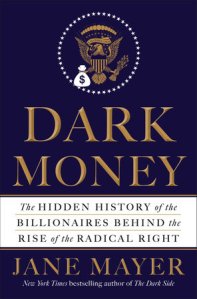 Of course, several extremely wealthy people do not agree with me.  As Jane Mayer documents in Dark Money, these individuals have used their wealth to promulgate a philosophy very different from my own.  Everybody knows that politicians can be bought — and cheaply, too, with hundred thousand dollar campaign contributions often resulting in million dollar lawsuits being dropped.  Well, academics can be bought, too.  University professors expend so much effort scrabbling for grants that it was unsurprising to learn how a few targeted donations led to steadfast ideological purity throughout the recipients’ careers.

These wealthy individuals (the Koch brothers, among others) self-describe as free market capitalists.  They claim to favor extremely limited governance, but their actions bely these claims.  In Mayer’s words,

Singer [who ran a hedge fund that bought “distressed debt in economically failing countries at a discount” then took “aggressive legal action to force the strapped nations, which had expected their loans to be forgiven, to instead pay him back at a profit”] described himself as a Goldwater free-enterprise conservative, and he contributed generously to promoting free-market ideology, but at the same time his firm reportedly sought unusual government help in squeezing several desperately impoverished governments, a contradiction that applied to many participants in the Koch donor network.

But this is nonsense.  All property carries a history of violence — government protection of “property rights” simply chooses an arbitrary cut-off date and legitimizes all violence that occurred on or before that date, while threatening violent reprisal against those who do not respect ownership claims from after that date.

Furthermore, the environmental regulations that Charles Koch denounces are property rights.  If you own a farm and somebody comes with a gun and tells you, “Get out, it’s mine now,” it’s pretty clear that the government has not protected your property rights.  But this isn’t so different from someone coming and setting fire to your farm — you used to have it, now you don’t.  It isn’t so different from someone starting a huge fire on their own property and letting the flames spread to yours.

And it isn’t so different from someone pumping out toxic sludge just upstream of your farm.  Your land was useful — it could grow food fit for human consumption.  If someone dumps a bunch of mercury upstream, now it can’t.  Most of the value of your property is gone, just as if someone had come and set fire to it.

If a corporation buys the land adjacent to your home and puts in a concentrated animal feeding operation, again, much of the value of your property will vanish.  It’s hard to breathe near those things, and most homeowners like to breathe.

Indeed, if you run a company that digs up coal or oil for people to burn, you should expect the government to tax your industry if you care about property rights.  Because your industry is wrecking property all over the globe.  At minimum, you should expect to compensate others for the losses you’re causing — that’s if a government protecting property rights would even allow you to churn out all that toxic waste.

But not everyone agrees.  In Mayer’s words,

The problem for this group [of oil & coal profiteers] was that by 2008 the arithmetic of climate change presented an almost unimaginable challenge.  If the world were to stay within the range of carbon emissions that scientists deemed reasonable in order for atmospheric temperatures to remain tolerable through the mid-century, 80 percent of the fossil fuel industry’s reserves would have to stay unused in the ground.  In other words, scientists estimated that the fossil fuel industry owned roughly five times more oil, gas, and coal than the planet could safely burn.  If the government interfered with the “free market” in order to protect the planet, the potential losses for these companies were catastrophic.  If, however, the carbon from these reserves were burned wantonly without the government applying any brakes, scientists predicted an intolerable rise in atmospheric temperatures, triggering potentially irreversible global damage to life on earth.

And, the solution?  Well, the real free market solution is simply to tax negative externalities so that harmful industries can make the correct cost benefit calculations.  If producers reap all the benefits but costs are spread over the entire population, they’ll make too much of a thing.

Indeed, this is a commonly-cited rationale for capitalism: back when many people’s wealth was their livestock, partitioned land holdings was seen as a cure for the tragedy of the commons.  A major cost of raising animals is feeding them, and without private land holdings everyone has an incentive to overgraze.

So, sure, I guess there’s another answer.  We could carve up the atmosphere, trap air in discrete boxes, try to stop all diffusion between them… and then allow the Koch brothers to pump out as much carbon dioxide as they want into their own home’s air.  Presumably they would make different choices, no government regulation required.  Or die — most laboratories gas dissection-bound mice with carbon dioxide.

But these solutions would make it slightly more difficult for our country’s wealthy to continue accumulating mind-boggling quantities of money.  So they’ve chosen a different plan: buy a bunch of academics to churn out philosophical nonsense nearly as toxic as the effluents from their industrial processes.  It’s depressing that this was so successful.

But let’s face it.  Philosophy is dull.  Economics is hard.  When enough people with fancy credentials trumpet nonsense loudly enough, it seems, people will believe.

When these donors began their quest to remake America along the lines of their beliefs, their ideas were, if anything, considered marginal.  They challenged the widely accepted post-World War II consensus that an activist government was a force for public good.  Instead they argued for “limited government,” drastically lower personal and corporate taxes, minimal social services for the needy, and much less oversight of industry, particularly in the environmental arena.  They said they were driven by principle, but their positions dovetailed seamlessly with their personal financial interests.