On Stephon Alexander’s ‘The Jazz of Physics.’

Instead of standing in front of a discount mall Santa and pretending to smile while somebody snaps our photo, my family records an album to send as our holiday card. Usually thirty minutes or so of original music played by family and friends.

The music isn’t always radio quality — though my younger brother, sister-in-law, cousin, uncle, and grandfather are professional musicians, the rest of us are decided amateurs — but we have fun making it.

Eight to ten songs a year, over the course of a decade, eats up a lot of ideas. Some evenings my brother and I would dither after everyone else went to bed. For 2013‘s Curse of the Ratist, our dithering included bowing a bass guitar hung on a wall mount. We aimed a microphone at a picture frame hung from that same wall some seven feet away.

You can bow a wide variety of objects and get interesting sounds. Violins, sure, but also any saw from the hardware store (which can give very human-like vocal tones), cymbals (these are lovely because they sound like sci-fi UFO landings… but be sure to ask first, because drummers will get upset if your rosin makes their cymbals sticky), the bell of some horns. Friction from the bow starts the object vibrating, and a vibrating object will push and pull at the nearby air, creating a traveling sound wave.

Or friction from a bow might start strings vibrating, which shakes the body of a bass, which shakes the wall it’s hanging from, which shakes a picture frame, which pushes and pulls the air, ready to be amplified by a microphone’s diaphragm. But the basic idea — an object wobbles back and forth to make sound — is the same.

Vibrations underly the workings of many aspects of the world. During college, I worked on a research project for a theoretical physicist who was curious whether residual vibrational energy contributed to DNA strand breaks. I scoff whenever I hear talk about a cure for cancer — “cancer” is an umbrella term to describe the inevitable imperfections that accumulate when you copy something over and over — but it is feasible to reduce the rate at which humans develop cancer. DNA strand breaks are one of the causes.

The research I was doing wasn’t going to save anyone, though. I was modeling a scenario in which electricity flows through the stacked bases as though a strand of DNA were a wire. The excess charge would cause each base it touched to change shape… then, when the charge jumped off, the base would return to its original shape. It would start vibrating. Can that vibrational energy transfer to the phosphate backbone and cause a strand to break?

Um, no. Probably not. After I’d worked on the project for about a year, I finally did a bunch of background reading and realized that our hypothesis was misguided. I was doing fancy calculations to model a process that almost certainly didn’t happen. Oops!

I did learn that it’s better to do research first, then work. Now I spend some two thirds of my work time reading, one third typing. I’d rather not waste another year.

Still, it was reasonable for my professor to think that vibrations would be involved. All matter has a wave-like nature. Vibrations rule the world.

In The Jazz of Physics, Stephon Alexander likens all vibrations to music. For instance, the nucleation of stars and galaxies from the homogeneous superheated cloud that burst into being in the Big Bang. My preferred analogy for this process is the concept of “snowballing” in game design — a small early advantage gives a player a boost throughout the game, making that player a clear favorite to win.

If you start with a large enough cloud of homogeneous gas — a universe-sized cloud — quantum fluctuations will cause some regions to be slightly more dense than others. These dense regions will then suck in neighboring molecules because they have a little bit of extra gravity. Over time, the inequality will grow: the rich get richer. But, in this case, that’s a good thing. It means galaxies can form.

Alexander’s preferred analogy is to music. He likens the early universe, with its pressure density waves, to an instrument.

And what does the CMB [cosmic background radiation] actually sound like? Some cosmologists have turned the frequencies of the CMB into sound, and though it is not very musical, it is not pure noise either. What is fascinating is there was an original quantum sound, which caused the first primordial vibrations in the plasma [that homogeneous cloud of gas that filled the early universe], and though this sound is categorized as white noise, its beauty is in the eyes of the beholder.

I find this analogy to be a stretch. But some of the others Alexander presents are lovely. For instance, his description of the interaction energy between neighboring spins in a magnetic material:

On the other hand, when neighboring spins disagree … there is more interaction energy caused by the tension between the disagreeing spins. One can imagine two people in a discussion. If they agree, there will be less to discuss, less interaction. If they disagree, they will interact more, trying to shift the other’s viewpoint.

I’ll definitely use his analogy the next time I teach this! Alexander found a clever similarity between two concepts, and that similarity will help others understand the idea from physics.

Whereas the analogy between cosmology and music, though clever, doesn’t seem like it’ll help many people learn physics. I know a fair bit about both music theory and physics, and I still struggled at times to follow Alexander’s logic.

I was also sad to see a bit of the physics presented incorrectly. For instance, his explanation of the photoelectric effect, for which Einstein won the Nobel Prize. Alexander writes that, until the early 1900s, 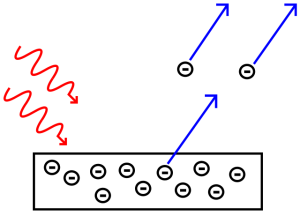 physicists thought a beam of light was like water coming out of a hose. If the volume of water is increased, the water will have more momentum. The same behavior was expected of light waves. But something different was seen in the photoelectric effect: no matter how intense the light, the same number of electrons came flying out. However, increasing the frequency of the light — essentially, making it bluer — caused the light to hit more electron homeruns. Two conclusions were drawn from this experiment:

1. Depending on the situation, light can behave like either a wave or a particle.

2. The kinetic energy that a beam of light imparts to electrons is related to the frequency of the light and not the intensity.

And a few of the supposed parallels between music and physics threw me. Alexander quotes the jazz saxophonist Mark Turner as saying, “When I’m in the middle of a solo, whenever I am most certain of the next note I have to play, the more possibilities open up for the notes that follow.” This is something many people can relate to. Too many options can be daunting. When a few constraints are imposed — guidelines for a project, or musical traditions that identify one note as “making sense” to play next whereas others would not — most people find they can be more creative. When I give the dudes in my writing class a prompt that’s too open-ended, a lot of them stare at their blank sheets of paper without writing anything.

But I have trouble relating the freedom & creativity that a little bit of structure engenders (maybe I should’ve turned this into an analogy about parenting instead) to the uncertainty principle.

Still, it was a fun little book. If you’re somebody who loves both music and physics, you might want to check it out.