During graduate school, I was stuck sitting around a lot.  Even after I finished all my coursework, there were near-compulsory seminars to attend, and  lab-mates’ practice talks, and weekly group meetings wherein everyone would describe all the experiments that failed over the past few days.  Which could be a bit dull, sure, but I’m an indefatigable optimist.  When I was stuck in meetings, I would draw cartoons.

I’ve included a few episodes from my old webcomic, Evil Dave versus Regular Dave, in previous posts (here & here), but I thought that for today’s post I would slap up a few more.  The site where I’d originally posted these has apparently vanished, so unless I display them here they’ll be stuck doing the electronic equivalent of moldering in an out-of-the-way file folder.  That doesn’t help anyone!

Not that displaying these here will necessarily help, either.  Cartoons drawn in the midst of boring meetings tend more toward the absurd than uproariously funny.  Honestly, most episodes of Evil Dave versus Regular Dave aren’t humorous in the slightest.  For instance, the following: perhaps you can imagine the sort of lulling drone (“many of you in the audience today might have thought that we already understood yeast DNA replication well enough, but what I wanted to address was, what if we investigated these same processes with an eye to more rigorous mechanistic detail?”) could inspire this sort of cartoon.  Especially if the cartoonist was both an inept artist and someone who’d read too much Camus during high school. 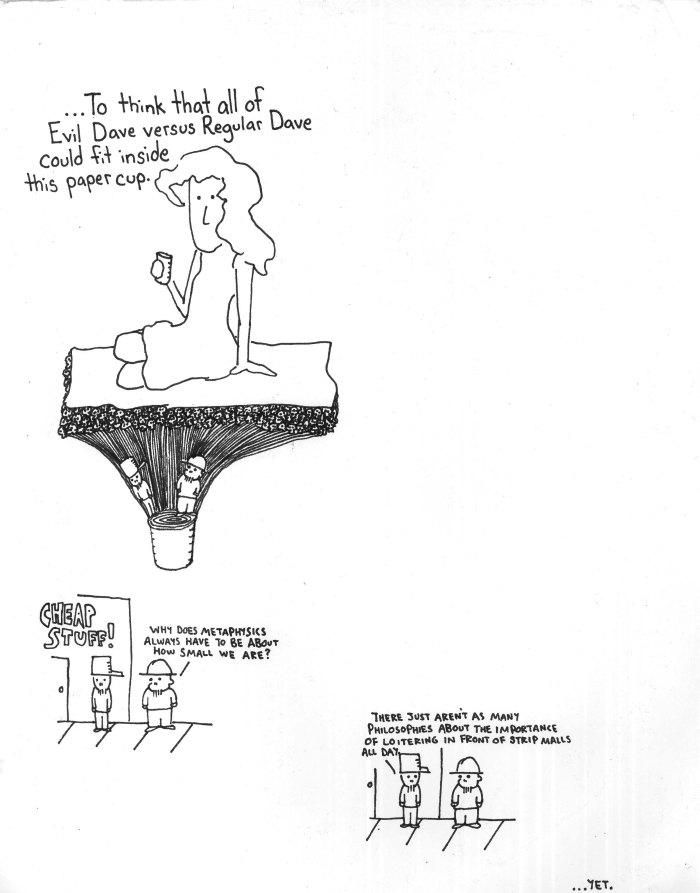 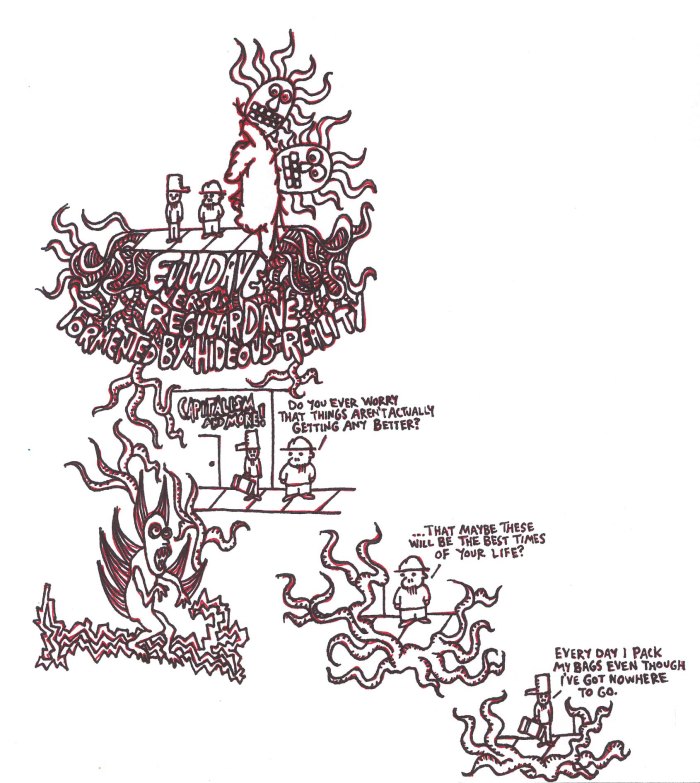 Even the few vaguely-humorous sentiments I included seemed to be primarily impulse control.  Rather than stand up and scream in the middle of a crowded auditorium full of emeritus professors nodding off while a colleague discusses his efforts to understand how bacteria assess optimal breeding strategies (this is called “quorum sensing,” and refers generally to the way gene expression changes as a function of population density in bacteria.  It’s also something that humans seem to be much worse at than bacteria.  Around the globe, it often seems like some of the highest rates of reproduction are found in places so crowded that infrastructure and the environment are already taxed to their limits), I’d draw something like this:

Who cares whether either Dave would really do that …  I wanted to leap up and pour juice on my head and start babbling demonic incantations!  Unfortunately, it seemed likely that my thesis committee would frown upon that sort of eccentricity.  And I’d never pour juice on my head.  Juice is too sticky, and too expensive.  For the final year or two of graduate school there was a song I sang every time I drove home from the grocery store: “There’s a hole in my head where the money goes … it’s called depression … I drink my juice.”  Although there were times when not even a ritzy juice like pomegranate or black cherry could cheer me up.

On the whole, I am much happier these days.  My current work — especially teaching the writing classes, which has a chance both to improve the dudes’ lives and to increase the chance that someone reading their work will recognize their fundamental humanity and feel ashamed of how we’ve treated them — feels meaningful in a way that my laboratory research did not.  My little family has enough money to live on. Our house is within a twenty minute walk of numerous libraries. We even have friends in town.

The only downside is that happiness, and a busy schedule, and very few doldrumish meetings to sit through, have led to Evil Dave versus Regular Dave languishing into near oblivion.  For something like two or three years while we were living in California, I posted these comics once a week.  The few I included in this post were culled from August 13th, 2009 to September 14th of that same year. There are many, many equally un-funny others. Now, it’s been ages since I’ve even looked at them.

With luck, perhaps my daughter will enjoy drawing.  Perhaps someday the strip will return, if she and I could sit and work on them together.