On the history of time travel.

From the beginning, artists understood that time travel either denies humans free will or else creates absurd paradoxes.

This conundrum arises whenever an object or information is allowed to travel backward through time.  Traveling forward is perfectly logical – after all, it’s little different from a big sleep, or being shunted into an isolation cell.  The world moves on but you do not… except for the steady depredations of age and the neurological damage that solitary confinement inevitably causes.

A lurch forward is no big deal.

Consider one of the earlier time travel stories, the myth of Oedipus.  King Laius receives a prophecy foretelling doom.  He strives to create a paradox – using information from the future to prevent that future, in this case by offing his son – but fails.  This story falls into the “time travel denies humans free will” category.  Try as they might, the characters cannot help but create their tragic future.

James Gleick puts this succinctly in his recent New York Review essay discussing Denis Villeneuve’s Arrival and Ted Chiang’s “Story of Your Life.”  Gleick posits the existence of a “Book of Ages,” a tome describing every moment of the past, present, and future.  Could a reader flip to a page describing the current moment and choose to evade the dictates of the book?  In Gleick’s words,

Can you do that?  Logically, no.  If you accept the premise, the story is unchanging.  Knowledge of the future trumps free will.

(I’m typing this essay on January 18th, and can’t help but note how crappy it is that the final verb in that sentence looks wrong with a lowercase “t.”  Sorry, ‘merica.  I hope you get better soon.) 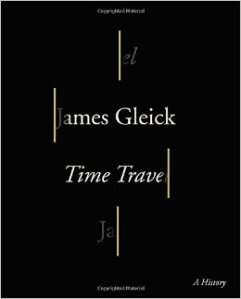 Gleick is the author of Time Travel: A History, in which he presents a broad survey of the various tales (primarily literature and film) that feature time travel.  In each tale Gleick discusses, time travel either saps free will (a la Oedipus) or else introduces inexplicable paradox (Marty slowly fading in Back to the Future as his parents’ relationship becomes less likely; scraps of the Terminator being used to invent the Terminator; a time-traveling escapee melting into a haggard cripple as his younger self is tortured in Looper.)

It’s not just artists who have fun worrying over these puzzles; over the years, more and more physicists and philosophers have gotten into the act.  Sadly, their ideas are often less well-reasoned than the filmmakers’.  Time Travel includes a long quotation from philosopher John Hospers (“We’re still in a textbook about analytical philosphy, but you can almost hear the author shouting,” Gleick interjects), in which Hospers argues that you can’t travel back in time to build the pyramids because you already know that they were built by someone else, followed by with the brief summary:

Admit it: you didn’t help build the pyramids.  That’s a fact, but is it a logical fact?  Not every logician finds these syllogisms self-evident.  Some things cannot be proved or disproved by logic.

Gleick uses this moment to introduce Godel’s Incompleteness Theorem (the idea that, in any formal system, we must include unprovable assumptions), whose author, Kurt Godel, also speculated about time travel (from Gleick: If the attention paid to CTCs [closed timelike curve] is disproportionate to their importance or plausibility, Stephen Hawkins knows why: “Scientists working in this field have to disguise their real interest by using technical terms like ‘closed timelike curves’ that are code for time travel.”  And time travel is sexy.  Even for a pathologically shy, borderline paranoid Austrian logician).

Alternatively, Hospers’ strange pyramid argument could’ve been followed by a discussion of Timecrimes [http://www.imdb.com/title/tt0480669/], the one paradox-less film in which a character travels backward through time but still has free will (at least, as much free will as you or I have).

But James Gleick’s Time Travel: A History doesn’t mention Timecrimes.  Obviously there are so many stories incorporating time travel that it’d be impossible to discuss them all, but leaving out Timecrimes is a tragedy!  This is the best time travel movie (of the past and present.  I can’t figure out how to make any torrent clients download the time travel movies of the future).

Timecrimes is great.  It provides the best analysis of free will inside a sci-fi world of time travel.  But it’s not just for sci-fi nerds – the same ideas help us understand strange-seeming human activities like temporally-incongruous prayer (e.g., praying for the safety of a friend after you’ve already seen on TV that several unidentified people died when her apartment building caught fire.  By the time you kneel, she should either be dead or not.  And yet, we pray).

Timecrimes progresses through three distinct movements.  In the first, the protagonist believes himself to be in a world of time travel as paradox: a physicist has convinced him that with any deviation from the known timeline he might cause himself to cease to exist.  And so he mimics as best he can events that he remembers.  A masked man chased him with a knife, and so he chases his past self.

In the second movement, the protagonist realizes that the physicist was wrong.  There are no paradoxes, but he seems powerless to change anything.  He watched his wife fall to her death at the end of his first jaunt through time, so he is striving to alter the future… but his every effort fails.  Perhaps he has no free will, no real agency.  After all, he already remembers her death.  His memory exists in the form of a specific pattern of neural connections in his brain, and those neurons will not spontaneously rearrange.  His memory is real.  The future seems set.

But then there is a third movement: this is the reason Timecrimes surpasses all other time travel tales.  The protagonist regains a sense of free will within the constraints imposed by physics.

Yes, he saw his wife die.  How can he make his memory wrong?

Similarly, you’ve already learned that the Egyptians built the pyramids.  I’m pretty confident that none of the history books you’ve perused included a smiling picture of you with the caption “… but they couldn’t have done it without her.”  And yet, if you were to travel back to Egypt, would it really be impossible to help in such a way that no history books (which will be written in the future, but which your past self has already seen) ever report your contributions.

Indeed, an analogous puzzle is set before us every time we act.  Our brains are nothing more than gooey messes of molecules, constrained by the same laws of physics as everything else, so we shouldn’t have free will.  And yet: can we still act as though we do?

We must.  It’s either that or sit around waiting to die.

Because the universe sprung senselessly into existence, birthed by chance fluctuations during the long march of eternity… and then we appeared, billions of years later, through the valueless vagaries of evolution… our actions shouldn’t matter.  But: can we pretend they do?