On fairness (and how we treat the utility monster).

Why would it be?  It’s not as though the universe is a fair place.  Some stars get to chug along for years, placidly spewing forth radiation in a fiery inferno of nuclear fission… other stars explode, collapse, or die. 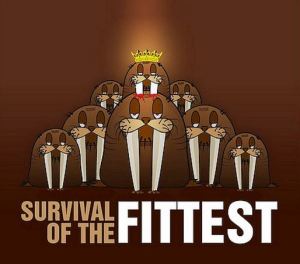 And then, among the living?  There’s “survival of the fittest,” which may or may not be fair, exactly, but “survival of the fittest” doesn’t even apply most of the time.  This form of natural selection only works when there’s a large population of individuals bearing a new mutation.  If a new gene is beneficial, the carriers probably survive a little longer or raise a few extra children, and over many generations the gene spreads through the population.

That’s the ideal.  More often, mutations arise in one individual at a time.  Even if a mutation is very beneficial, like a squirrel gene that helps the little critter find and cache 20% more food for winter, there’s a good chance that with one chomp of a roving wolf’s jaws the beneficial mutation disappears.  Evolution relies on a hefty dollop of dumb luck before “survival of the fittest” kicks in.

And yet, most humans are interested in fairness.  Despite being born into a blatantly unfair universe, we strive for better.

But it’s hard, not least because we have no examples showing us what fairness is.  Moral philosophers… and economists… and warlords, kings, peasants, and voters… have bickered for ages.  Would “fair” mean providing everyone with equal wealth?  Or equal opportunity?  Or equal treatment?

It’s quite clear that we’re not born equal.  We carry different genes.  Our mothers ate differently during pregnancy.  Would it be “fair” to recognize those inherent differences and provide more to those with the “best” genes, that they might flourish?  Or to provide more to those with the least biological advantages, that outcomes could be more equal?

Worse… it’s not clear, when we talk about making the world fair, who even counts.  Should we strive for fairness within our own families?  Our towns?  Our countries?  For all people who speak our language?  Or across the whole planet?

Sometimes you can be pretty confident.  If I walked into a room and saw you, dear reader, sitting beside a clam, I’d assume that you are more similar to me than the clam is.  But the boundaries are fuzzy.  Who is more similar to me, Barack Obama or 45?  Does the answer matter in terms of how each should be treated in a “fair” world?

Is a chimpanzee similar enough to me to deserve a little slice of fairness?  A macaque?  A cat?  A caterpillar?

The answer isn’t out there in the universe, waiting for us.  We have to decide for ourselves.

In economics – especially the conservative Milton-Friedman-esque strains – the goal is to make the world “Pareto optimal.”  This means no one could be made better off without making someone else worse off.  Of course, Pareto optimal distributions of wealth can be blatantly unfair – I’m not keen on the ideas of Milton Friedman. 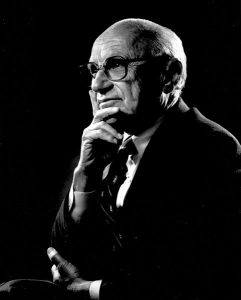 (One of my professors for graduate macroeconomics loved telling Friedman anecdotes, including a story about Friedman being asked his opinion on tax policy and simply rattling off the theorem “CE is PO.”  Where “CE” means “competitive equilibrium,” i.e. no tax policy at all.  He was joking, but barely.  Whereas all competent economists agree that people behave in wildly undesirable ways unless tax policy is used to balance the costs of negative externalities, i.e. you charge people for dumping pollution into the river.)

One of the stronger (those still irreparably flawed) contenders for a “fair” way to run the world is “utilitarianism.”  This philosophy claims that we should act in a way that maximizes “utility,” i.e. happiness, for the population as a whole.  Which sounds good – who wouldn’t want to make everybody happy?

To even get started on utilitarianism, you have to answer all those questions.

And then the real headache begins.  Because… how exactly do you calculate how happy someone is?  If I have one small cookie and two children, I can feel pretty confident that either child would be happy to eat it… at which point utilitarianism dictates that I give the cookie to the child who would enjoy it most.

Our capacity to experience joy, after all, is not equal.

This is the logic used for my favorite rebuttal of utilitarianism: the “utility monster” argument.

Utilitarianism imagines we should redistribute goods to make everyone as happy as possible.  Most people experience diminishing returns – a second bowl of ice cream does not make us as happy as the first – but it’s quite possible that my second cookie would bring me 9 units of utility, and your first cookie would bring only 6 units of utility (maybe you’re not fond of chocolate chips, or are diabetic), in which case, if we had two to share, I should get both.

The hypothetical Utility Monster is a creature so good at feeling happy that we should all sacrifice everything to satiate its desires, enslaving ourselves to its wants.  I might experience a “disutility” of 1,000 from being enslaved (actually, that seems low – would I really trade my freedom for a hundred cookies?), but if the Utility Monster gets a utility of 3,000 from having another slave, utilitarianism would chain me up.

(Worse, if the founding Americans knew that their slaves experienced a disutility of 1,000 from being enslaved, and a bigoted white “owner” gained only 300 from that ownership, utilitarianism would still say to do it if the founders felt that black emotions and experiences were only one fourth as meaningful as their own.  Or, in contemporary times: if a chicken receives a disutility of 1,000 from being treated as a food-production machine, and I receive a utility of only 30 from having eggs, utilitarianism says we should do it if the chicken is only one hundredth as important as a human being.  The weighted sum of utilities becomes my + 30 times 100 balanced by the chicken’s -1,000.  The world as a whole is better off!)

The Utility Monster is clearly an imaginary creature.  But there are people who are better at experiencing pleasure than others.  A human gene variant for nicotine receptors seems to make cigarettes more pleasurable, and the bearers have more trouble than average quitting smoking.  Several human gene variants seem correlated with enjoying food more, and the bearers are more likely to struggle with weight.

I don’t enjoy the taste of common desserts as much as my daughter.  If I had access to a cake and a bowl of hummus, I’d choose mostly chick peas.  Not out of any moral virtue – that’s simply the taste I enjoy more.  Whereas N would eat cake.

Similarly, painkillers do not bring all humans the same pleasure.  Most people have been prescribed painkillers at one time or another; most college students have probably swallowed a few Vicodins recreationally.  Personally, I never enjoyed opiates much.  They made my mind feel slow, my skin cold, my movements underwater.  It was peaceful, but some people, like David Foster Wallace wigging out while pampered on a cruise ship, don’t enjoy that sense of peace as much as others.

The Utility Monster, however – a creature so good at feeling pleasure that we should all sacrifice ourselves to make it happy – would get hooked at the first taste.  My own failure to enjoy painkillers protected me from addiction.

In a society when most people try painkillers at one time or another – after wisdom teeth, or a broken arm, or a work-related back injury – those citizens who most resemble the mythical Utility Monster will wind up addicted.  After tasting that pleasure, they’ll do what they can to seek it out again.  Yes, there are costs.  Drugs are illegal.  Habitual drug use wrecks our minds and bodies.  We can’t properly communicate with our friends or families while blinkered on opiates.  But, if the pleasure is great enough (or the withdrawal pain of not using sufficiently severe), people will choose the drugs.

And so we can see what our society thinks of utilitarianism.  This philosophy advocates we sacrifice everything for those most capable of feeling pleasure.  In our world, we lock them in a box.