On the Bush years, from the perspective of the 45th.

In Ghostbusters II, the parapsychologists learned that certain words were dangerous.  A strange pink slime burgeoned beneath New York City, bringing with it a wide variety of malevolent spirits.  Every vile, hateful thing that anyone said caused the slime to grow in power.  Let slip too many insults and the muck might expand to engulf the world.

Similarly, our nation is currently helmed by an erratic figurehead that seems to draw strength from every intonation of his name.  During the primaries, and then the general election, much of what was said about our 45th was bad.  But content was irrelevant.  All that mattered was the name.  After all, the name is his key asset.  In the business world, most of his ventures folded, and the empire rebounded from bankruptcy on the value of the name alone, a crisp, bold, status-conferring word to adorn crassly gilded buildings.

And so, even though there is obviously more to write about the state of our nation, K (with the help of some lovely letters to the editor) convinced me to stop using the name.

I’ve also been binging Eliot Weinberger’s essays on my Netflix lately.  (Clarification from K: “By ‘Netflix,’ he means his library card.”)

Until I picked up his Ghosts of Birds, I’d never read anything by Weinberger.  This is tragic, because he’s been publishing phenomenal essays for decades.  “The Falls,” from Karmic Traces, is a brutal compression of three thousand years of racism.  An Elemental Thing is gorgeous throughout its two hundred pages.  Written Reaction is riddled with wry snark and lovely poetry recommendations.

And then there’s 2005’s What Happened Here: Bush Chronicles, which has proven invaluable to me as I attempt to make sense of our nation’s current political situation.

From the opening page: 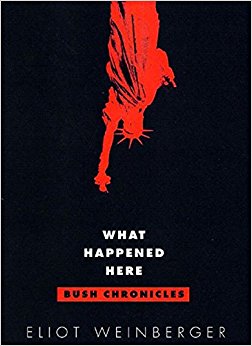 Al Gore received some 540,000 more votes than George W. Bush.  Presidential elections, however, are determined by the archaic system of an Electoral College, to which each state sends  representatives who vote according to the will of that state’s voters, nearly always on a winner-takes-all basis.  An 18th-century invention, the College was a last-minute political concession to Southern slave owners when the Constitution was written.  Representatives were apportioned according to population; slaves, of course, could not vote, but they were considered to be three-fifths of a human in the calculations, thus increasing the populations of the slave states and the number of their representatives.

Enlightened now, we have done away with slavery.  We’ve kept the electoral college, though, which continues to suppress the voice of populous urban areas.  And we’ve kept the system of counting voice-less black bodies to inflate the votes of their oppressors: we build prisons in white, rural, Republican-leaning districts.  The prisoners count toward the local population – not the population of whatever district they lived in & will return to – but are not allowed to vote while there.

Stealing representation from prisoners’ home districts matters most for the composition of congress.  But the basic premise of the electoral college – intentionally undercounting urban votes – subverted the will of the American people in 2000, when Gore won by half a million votes, and more egregiously in 2016, when Clinton won by two million. 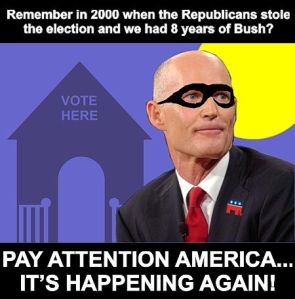 Awarding the presidency to the losers was constitutional.  Somewhat less so in 2004, when clownish Supreme Court justices with clear conflicts of interest prevented the state of Florida from accurately awarding their votes, but constitutional nonetheless: in Weinberger’s words, “Our Founding Fathers had a limited enthusiasm for democracy.”

After the inauguration, though, it didn’t take long for the constitutional egress to begin.  Bush tortured innocent Muslim men.  45 keeps attempting to ban them from our country.  Bush practiced an obscene cronyism.  Here’s Weinberger:

If you drill into Bush’s skull, what you mainly find is a pool of oil.  It’s difficult to understand Bush – especially when he speaks – but it is somewhat easier if one realizes that he sees the whole world exclusively in terms of the production and consumption of oil.

But if you drill to the core of George W. Bush’s being, there is something else, something that seems so hyperbolic, that so smacks of the cliches of old Communist propaganda, that it is hardly believable.  And yet the evidence of his term as the Governor of Texas, and the daily evidence of his presidency, proves that it is true.  Once one clears away the rhetoric that he is handed to read out loud, it is apparent that Bush believes that his role, his only role, as President of the United States is to help his closest friends.

And yet, somehow, 45 has taken this practice further.  Rather than presume that his role in office is to help his friends make money, 45 acts only to help himself.  He uses the presidency as an advertising platform; he badgers corporations that threaten his family brand; he reaps membership fees from wealthy individuals purchasing the opportunity for political contact; he bestows favors on nations where he owns significant properties (note, for instance, which nations were left off his executive orders on immigration).

Of course, neither Bush nor 45 could act alone… but Weinberger has you covered here, too.  Despite being over a decade old, his “Republicans: A Prose Poem” is still tragically relevant.  If anything, a reprise would be even more grim.  The piece is charming, though.  And a lot of fun, with lines like:

George W. Bush, President of the United States, is a Republican.  To demonstrate personal sacrifice and his determination to win the War on Terror, he gave up desserts and candy a few days before he announced the invasion of Iraq.

And yet Bush, despite his unpopularity and incompetence – nominating a governor from a wretchedly polluted state who believed in “voluntary compliance” to run the EPA; inundating the public with lies and misinformation (Weinberger: “Reagan, as everyone knows, was the master of transforming Washington into Hollywood, with his photo opportunities and careful scripts.  Bush has taken this one step further: Whereas Reagan’s scenarios were advertisements meant to promote what he was doing, Bush’s are often heartwarming television vignettes that are the opposite of his actual policies.  Thus we have had Bush in the forest extolling the beauty of the national parks, while opening them up for logging and mining, Bush reading to schoolchildren (as he was yesterday) while cutting the budgets for libraries.  Or, my favorite Bush moment: a speech he gave to something called the Boys and Girls Clubs of America, a community-service group, calling them exemplary of what makes America strong and free.  The next day, his administration completely eliminated their government funds.”); selecting a racist, hateful white southerner to serve as attorney general – was elected to serve a second term.

It’s unlikely Bush could have won in 2004 (after all, he’d lost in 2000, before people even realized what a mockery he’d make of our government) if the 9/11 terrorist attacks had not occurred.

And we’re in a similar situation now.  From Mark Danner’s “What Could He Do”:

… we must see the likelihood of a crisis as the vital springboard of a [45] presidency, especially an increasingly shaky, unpopular, and unstable one.  The lower his poll numbers, the more outlandish his lies, the greater the resistance from opponents within the bureaucracies, the thicker his scandals and chaos, the likelier he will be to seek to use a crisis and all the opportunities it offers to lever himself from a position of defensiveness to that of dominating power.

To maintain power, 45 needs the United States to be attacked.  From that perspective, his foreign policies are totally reasonable.  In Danner’s words:

If, as the Islamic State has asserted, the goal of its attacks in the West has been to “eliminate the gray zone” … then [45]’s immigration ban goes far toward accomplishing the same thing: isolating Islamic communities, placing them all among a besieged minority whose travel is restricted and whose loyalty to their adopted countries is put into question. … If one sought to design a policy to encourage radicalization, it would be hard to suggest a better one.

Similarly, why not deliberately offend every other nation.  45 cannot guarantee that his belligerence against Muslims will prompt the attack he so sorely needs.  Every possible “other” who might be molded into a threat is worth pursuing: Muslims, Mexicans, Koreans, Chinese… our own citizens who happen to have more epidermal melanin than 45 himself does… hell, even Australians… any attacker who is not a good white Christian American would do.

But at least we have Eliot Weinberger, writing to warn us.  His words from January 2001, months before the attack:

“If the economy sinks, as it probably will, a return to Iraq will certainly be the most expedient distraction.”

And Weinberger’s words from September 12th, the day after the attack:

…the logic of George Bush’s seeming cowardice has received some ingenious explication.  Today, administration officials claimed that the terrorist attack was actually an assassination attempt, that the airplane that struck the Pentagon was intended for the White House (but hit the Pentagon by mistake), and that the plane that had crashed in Pennsylvania was somehow supposed to crash into the President’s jet, Air Force One.  I happened to watch these pronouncements on television with a group of 13-year-olds; they all burst into derisive laughter.

That in a time of national crisis – a moment when, amidst waning government powers everywhere, government actually matters – the country is being led by a man laughed at by children may create psychic wounds as severe as those caused by the attack itself.

And, from 2003’s “Poetry is News,” collected in Weinberger’s Oranges & Peanuts for Sale: