The scientific method is the best way to investigate the world.

Do you want to know how something works?  Start by making a guess, consider the implications of your guess, and then take action.  Muck something up and see if it responds the way you expect it to.  If not, make a new guess and repeat the whole process.

This is slow and arduous, however.  If your goal is not to understand the world, but rather to convince other people that you do, the scientific method is a bad bet.  Instead you should muck something up, see how it responds, and then make your guess.  When you know the outcome in advance, you can appear to be much more clever.

A large proportion of biomedical science publications are inaccurate because researchers follow the second strategy.  Given our incentives, this is reasonable.  Yes, it’s nice to be right.  It’d be cool to understand all the nuances of how cells work, for instance.  But it’s more urgent to build a career.

Both labs I worked in at Stanford cheerfully published bad science.  Unfortunately, it would be nearly impossible for an outsider to notice the flaws because primary data aren’t published.

A colleague of mine obtained data by varying several parameters simultaneously, but then graphed his findings against only one of these.  As it happens, his observations were caused by the variable he left out of his charts.  Whoops!

(Nobel laureate Arieh Warshel quickly responded that my colleague’s conclusions probably weren’t correct.  Unfortunately, Warshel’s argument was based on unrealistic simulations – in his model, a key molecule spins in unnatural ways.  This next sentence is pretty wonky, so feel free to skip it, but … to show the error in my colleague’s paper, Warshel should have modeled multiple molecules entering the enzyme active site, not molecules entering backward.  Whoops!)

Another colleague of mine published his findings about unusual behavior from a human protein.  But then his collaborator realized that they’d accidentally purified and studied a similarly-sized bacterial protein, and were attempting to map its location in cells with an antibody that didn’t work.  Whoops!

No apologies or corrections were ever given.  They rarely are, especially not from researchers at our nation’s fanciest universities.  When somebody with impressive credentials claims a thing is true, people often feel ready to believe. 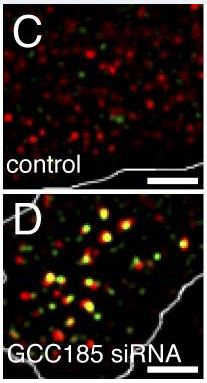 Before conducting the experiment, I wrote a computer program that would assess the data.  My program could identify various cellular structures and check the fraction that were each color.

As it happened, I didn’t get the results we wanted.  My data suggested that our guess was wrong.

But we couldn’t publish that.  And so my advisor told me to count again, by hand, claiming that I should be counting things of a different size.  And then she continued to revise her instructions until we could plausibly claim that we’d seen what we expected.  We made a graph and published the paper.

This is crummy.  It’s falsehood with the veneer of truth.  But it’s also tragically routine.

One of these nightmares is driven by the perverse incentives facing early neurosurgeons.  Perhaps you noticed, above, that an essential step of the scientific method involves mucking things up.  You can’t tell whether your guesses are correct until you perform an experiment.  Dittrich provides a lovely summary of this idea:

The broken illuminate the unbroken.

An underdeveloped dwarf with misfiring adrenal glands might shine a light on the functional purpose of these glands.  An impulsive man with rod-obliterated frontal lobes [Phineas Gage] might provide clues to what intact frontal lobes do.

This history of modern brain science has been particularly reliant on broken brains, and almost every significant step forward in our understanding of cerebral localization – that is, discovering what functions rely on which parts of the brain – has relied on breakthroughs provided by the study of individuals who lacked some portion of their gray matter.

While the therapeutic value of the lobotomy remained murky, its scientific potential was clear: Human beings were no longer off-limits as test subjects in brain-lesioning experiments.  This was a fundamental shift.  Broken men like Phineas Gage and Monsieur Tan may have always illuminated the unbroken, but in the past they had always become broken by accident.  No longer.  By the middle of the twentieth century, the breaking of human brains was intentional, premeditated, clinical.

Dittrich was dismayed to learn that his own grandfather had participated in this sort of research, intentionally wrecking at least one human brain in order to study the effects of his meddling.

Lacking a specific target in a specific hemisphere of Henry’s medial temporal lobes, my grandfather had decided to destroy both.

This decision was the riskiest possible one for Henry.  Whatever the functions of the medial temporal lobe structures were – and, again, nobody at the time had any idea what they were – my grandfather would be eliminating them.  The risks to Henry were as inarguable as they were unimaginable.

The risks to my grandfather, on the other hand, were not.

At that moment, the riskiest possible option for his patient was the one with the most potential rewards for him.

By destroying part of a brain, Dittrich’s grandfather could create a valuable research subject.  Yes, there was a chance of curing the patient – Henry agreed to surgery because he was suffering from epileptic seizures.  But Henry didn’t understand what the proposed “cure” would be.  This cure was very likely to be devastating.

At other times, devastation was the intent.  During an interview with one of his grandfather’s former colleagues, Dittrich is told that his grandmother was strapped to the operating table as well.

“It was a different era,” he said.  “And he did what at the time he thought was okay: He lobotomized his wife.  And she became much more tractable.  And so he succeeded in getting what he wanted: a tractable wife.”

Compared to slicing up a brain so that its bearer might better conform to our society’s misogynistic expectations of female behavior, a bit of scientific fraud probably doesn’t sound so bad.  Which is a shame.  I love science.  I’ve written previously about the manifold virtues of the scientific method.  And we need truth to save the world.

Which is precisely why those who purport to search for truth need to live clean.  In the cut-throat world of modern academia, they often don’t.

Dittrich investigated the rest of Henry’s life: after part of his brain was destroyed, Henry became a famous study subject.  He unwittingly enabled the career of a striving scientist, Suzanne Corkin.

Unlike Teuber’s patients, most of the research subjects Corkin had worked with were not “accidents of nature” [a bullet to the brain, for instance] but instead the willful products of surgery, and one of them, Patient H.M., was already clearly among the most important lesion patients in history.  There was a word that scientists had begun using to describe him.  They called him pure.  The purity in question didn’t have anything to do with morals or hygiene.  It was entirely anatomical.  My grandfather’s resection had produced a living, breathing test subject whose lesioned brain provided an opportunity to probe the neurological underpinnings of memory in unprecedented ways.  The unlikelihood that a patient like Henry could ever have come to be without an act of surgery was important.

By hiring Corkin, Teuber was acquiring not only a first-rate scientist practiced in his beloved lesion method but also by extension the world’s premier lesion patient.

According to [Howard] Eichenbaum, [a colleague at MIT,] Corkin’s fierceness as a gatekeeper was understandable.  After all, he said, “her career is based on having that exclusive access.”

Because Corkin had (coercively) gained exclusive access to this patient, most of her claims about the workings of memory would be difficult to contradict.  No one could conduct the experiments needed to rebut her.

Which makes me very skeptical of her claims.

Like most scientists, Corkin stumbled across occasional data that seemed to contradict the models she’d built her career around.  And so she reacted in the same was as the professors I’ve worked with: she hid the data.

Dittrich: Right.  And what’s going to happen to the files themselves?

She paused for several seconds.

Dittrich: Shredded?  Why would they be shredded?

Corkin: Nobody’s gonna look at them.

Dittrich: Really?  I can’t imagine shredding the files of the most important research subject in history.  Why would you do that?

Corkin: Well, the things that aren’t published are, you know, experiments that just didn’t … [another long pause] go right.