On apocalypse-preppers, technology, and oppression. 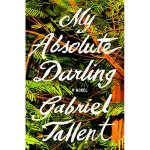 In Gabriel Tallent’s My Absolute Darling, the protagonist is preparing for apocalypse.  At a parent-teacher conference, her dad rants that our world is falling apart – we’re polluting the oceans, growing monocultures of a select few (vulnerable) food crops across all arable land, disrupting the climate, overpopulating the planet – and that it’s ridiculous for his daughter to take spelling quizzes in the face of such calamity.  At home, he has her cleaning guns instead of studying for school.

On dating sites specifically catering to preppers and survivalists, men far outnumber women.  On the banner image for the C.U.M.A. Survival School (which teaches combat techniques, animal trapping, how to build fires, and the like), there are three women out of seventeen visible people.

Journalist Nicky Woolf interviewed attendees at a 2015 Preppers and Survivalists Expo in Florida.  One of the men Woolf spoke with was sitting beside a handwritten recruitment sign, looking for someone with medical training to join his team.  Woolf asks the man whether his wife came to the Expo.

He suddenly looks tired.  “No.”  I ask if this is a point of contention between the two of them.  “I bought equipment for my son,” he says.  “I bought three of everything, one for me, one for my wife, one for my son.  My son is too possessed, and my wife is totally mind-controlled by the programs on the TV, the fluoride she’s drinking – because fluoride…”  Bingo!  He begins another rant.

For some reason, I find this unbearably sad.

“How does that make you feel?” I ask.

While I was researching a story about a hands-on retreat teaching the history of technology – under the auspices of recreating our world after a disaster – I realized there was a strong feminist argument for preserving this knowledge. 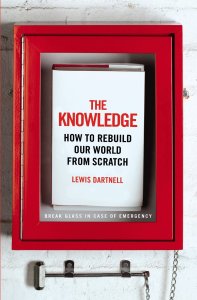 Lewis Dartnell distills some of this information in The Knowledge: How to Rebuild Our World from Scratch.  Dartnell focuses on contemporary technologies, especially methods to jump-start food production and long-distance communication from the detritus of our current civilization.  The book is focused on the future – Dartnell convincingly argues that technological development after our civilization’s collapse would progress very differently than it did in the past, both because contemporary artifacts would remain to be learned from … and because we’ve already depleted the easily-accessible fuel sources that powered our own industrial revolution.

If we were starting again, we would have to make green technologies.

The history of technology still matters, though.  Contemporary gender inequality sprung from that history. 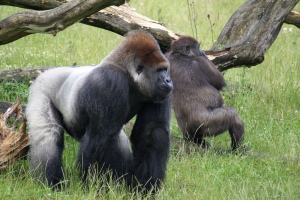 Among most primate species, gender inequality is correlated with sexual dimorphism – when males are a lot bigger, they behave badly.  In bonobos and chimpanzees, males and females are relatively close in size … and they have relatively equal status.  In gorillas or orangutans, males are much larger than females … and females can have pretty rotten lives.

And humans?  We actually have pretty low sexual dimorphism.  The average male is bigger than the average female, but only by about 15%.  Based on the behaviors of other primates, we ought to be fairly egalitarian.  Through most of our evolutionary history, we probably were … as were many of the hunter-gatherer societies that persisted until recent eras.

But you wouldn’t know it by looking at contemporary U.S. news.  And we’re doing better now than we have been for the past several centuries. 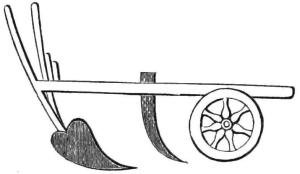 In our current world, being 15% bigger provides very little benefit.  Gasoline-powered machines do our heavy lifting.  But the importance of human sexual dimorphism was accentuated by early technologies. Our size differences mattered more once we developed agriculture … and seemed crucial after the invention of the plow.

Being 15% bigger does matter if you’re plowing a field.  Suddenly, men were more important for food production than women.  The status of women in these cultures plummeted.  And – lucky us – our culture derived from theirs.

In Sapiens: A Brief History of Humankind, vegan historian Yuval Noah Harari depicts the development of agriculture as a kind of “original sin.”  After agriculture, the average person experienced a much lower quality of life.  Agriculture made progress possible, but only because it made oppression possible.  Serfs could be taxed to feed the idle rich.  After agriculture, most people worked harder and ate worse.  Inequality soared.

Certain patches of land were better than others before agriculture.  Even among hunter-gatherers, there are skirmishes.  Tribes fight; people die.  But agriculture made war worthwhile.

And agrarians thought it reasonable to spin myths about the weakness of women.  15% more body mass meant the world to them … and we still celebrate their stories.

Let’s hope we never go through that again.