On prayer, diversity among deities, and ADHD.

My new favorite computer game begins each round as a real-time strategy game like Starcraft.  You command your little empire to build temples and offer up various sorts of psalms – will you praise your deity’s ever-gathering hands, its watchful vigilance, its fiery vengeance?

After you feel that you’ve done enough to celebrate your deity, you can command your priests to summon it – at which point the gameplay switches to a third-person adventure mode vaguely reminiscent of the old arcade classic Rampage.  You must attempt to destroy opposing civilizations with your deity … but there’s a twist.  The attributes of your deity reflect the way it was prayed to.  With too much emphasis on its “ever-gathering hands,” your god’s hands become massive. Those unwieldy appendages drag behind you as you walk, plowing deep furrows into the ground.

In this phase of the game, the controls can seem laggy and loose.  It turns out that this is intentional; as in the game Octodad, an inability to control your creation is an essential part of the game.  Certain types of prayer might make your deity more powerful but also more difficult to manage.

Presumably you’d avoid this sort of self-destructive excess – like praising wrath to the extent that your god destroys your own kingdom promptly after being summoned – but opposing players can infiltrate your civilization with heretics, and the way they pray will affect your god as well.

Arturo Perez-Reverte’s The Club Dumas ends with the idea that “everyone gets the devil he deserves.”  This is the underlying concept of the game, but for gods instead of demons.

First Coming includes elements of both real-time strategy and arcade smash-em-up.  And the idea of human prayer sculpting physically-manifest deities is intriguing.  I’d go so far as to argue that it’s the greatest game, flawed only in that it doesn’t live up to the Ontological Argument for the existence of God. 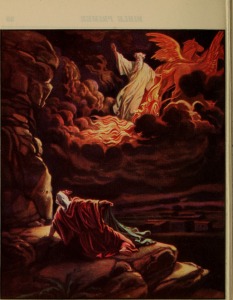 We live in a culture that reveres vengeance.  The majority of the U.S. worships a deity who was praised for his violence.

Sometime around 600 BCE, a kingdom that worshiped a local deity called Yahweh was conquered by Nebuchadnezzer, whose people worshiped the storm god Marduk.  After the surrender, many of the conquered people were deported to Babylon, where they would help make that city the most splendid in the world.

But some of the conquered Hebrews were allowed to remain in Jerusalem, where they still worshiped Yahweh in traditional ways – mostly by ritually killing animals – until they attempted to regain their independence.  Then the Babylonian king Nebuchadnezzer sent an army to circle the city.  The people began to starve.  The uprising was crushed.

The Hebrew leader was captured.  He was held, struggling, a soldier on either side restraining his arms.  One by one the Babylonian conquerors brought Zedekiah’s children.  The leader surely screamed, begging to die.  The soldiers gripped his arms more tightly.  And (2 Kings 25) they slew the sons of Zedekiah before his eyes, and put out the eyes of Zedekiah.  Those murders were his last sights, lingering in his blinded mind.  His sons bodies spilling blood from their slit necks into the dust.

Many more of the remaining Hebrews were then deported to Babylon, to slave for the greatness of that city.  They carted stones to build monuments to Marduk.  This god’s temples soared into the sky, one some seven stories high.

And the Hebrews saw the ceremonies held to celebrate Marduk.  On the fourth day of the New Year’s festival, priests read from a sacred text, the Enuma Elish, describing the origin of the world.  The old gods had sex; they were murdered by their children; the flesh of their bodies was used to construct heaven and earth.  Other sacred texts included the Atrahasis – which describes the flood that nearly destroyed humanity when we became too noisy and disturbed the gods’ rest – and Gilgamesh – which celebrates fraternal love.

In The Rise and Fall of Adam and Eve, Stephen Greenblat writes that “These works feature gods – a whole pantheon of them – but Yahweh is nowhere among them, let alone their lord and master.”

The Hebrew people were crushed, their god so insignificant that he appeared in none of the victors’ stories.  And so the Hebrews fought back … with words.  They wrote a sacred text of their own, one in which Yahweh reigned supreme and the Babylonian tales were mockingly tweaked.  The glorious temples gave rise to “The Tower of Babel,” symbol of mankind’s unwarranted arrogance.  In the Hebrew flood story, humans were killed because the city people – and none were more urbane than the Babylonians – were corrupt.  Sex did not mark the origin of the world, but rather began after the fall.

And they sang psalms to a deity patiently waiting to enact murderous revenge:

By the rivers of Babylon, there we sat down, yea, we wept, when we remembered Zion

We hanged our harps upon the willows in the midst thereof.

How shall we sing the Lord’s song in a strange land?

… and, in answer of their own question, the conquered people begin to sing …

If I forget thee, O Jerusalem, let my right hand forget her cunning.

If I do not remember thee, let my tongue cleave to the roof of my mouth; if I prefer not Jerusalem above my chief joy.

Remember, O Lord, the children of Edom in the day of Jerusalem; who said, Raze it, raze it, even to the foundation thereof.

O daughter of Babylon, who art to be destroyed; happy shall he be, that rewardeth thee as thou hath served us.

Happy shall he be, that taketh and dasheth thy little ones against the stones.

After the siege, Hebrew sons were murdered, daughters were raped, those of able body were made slaves.  They asked of their god revenge.  They prayed to a lord who would kill, and abet their killing, to restore their kingdom.

And … several millennia later … our philosophical traditions are rooted in their prayers.  Our nation is embroiled in retributive wars.  Our punitive prisons are overflowing, with those unfortunate enough to land inside often made worse by their time there.

Yahweh was praised for his patient pursuit of vengeance.  And we celebrate those qualities – in school, especially, we praise those able to dispassionately sit for hours, ingesting knowledge.  Those with difficulty sitting still, we drug.

Which is sad – there are many ways of being smart, even if our culture celebrates only one of them.

Indeed, many cultures have told myths with ADHD heros.  In the Apache myth of the origin of fire, Fox joined a flock of geese in flight … but then forgot the rules for staying in the air.  But that was okay – it was only after he tumbled to earth that he had a chance to steal fire from a tribe of fireflies and bring it to mankind.

In many Polynesian myths of the origin of fire, it was brought by Maui … whose impulsiveness would almost surely lead to an ADHD diagnosis in the contemporary United States.  Each time he received a gift of fire from his ancestor in the underworld – she was pulling off burning finger- or toe-nails and giving them to him – he intentionally quenched them in a nearby stream, just to see what she’d do next.  His curiosity was nearly the death of him.  Irked, she lit the world on fire.

In the Norse pantheon, Loki sometimes plans … but more often pursues whatever rebellious notion pops into his head.  The mutant children he sired will destroy the world.  His penchant for vicious barroom taunting (and impromptu murder) angered all other gods and led to his repeated exile from their kingdom.

But his exploits were still celebrated.

Or there’s Annabeth in Rick Riordan’s The Lightning Thief, a daughter of Athena who helps the protagonist recover after a battle with a minotaur:

“And the ADHD – you’re impulsive, can’t sit still in the classroom.  That’s your battlefield reflexes.  In a real fight, they’d keep you alive.  As for the attention problems, that’s because you see too much, Percy, not too little.  Your senses are better than a regular mortal’s.  Of course the teachers want you medicated.  Most of them are monsters.  They don’t want you seeing them for what they are.”