On Buddhism, suffering, and Deadpool. 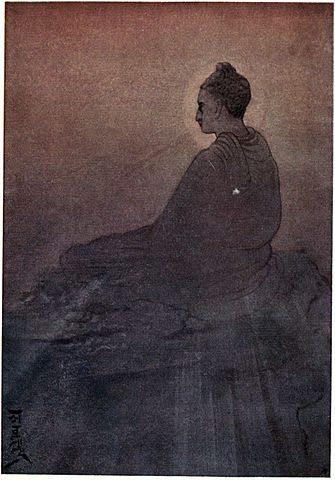 Siddhartha was born into luxury.  Wealth wasn’t enough to banish a nagging sense of emptiness, but if Siddhartha hadn’t left the palace, he never would’ve known deprivation.

Instead, he walked.  He met people afflicted with worse ills than his own lack of purpose – bedraggled souls who were poor, and sick, and miserable.  He was horrified by the world we humans have been given.

Seeking a way to improve people’s lives, Siddhartha began to meditate.  He sat beneath a tree and cleared his mind until it effervesced with psychedelic hallucination.

The local gods feared that Siddhartha would gain enlightenment.  Like Yahweh in the Old Testament, these gods believed that knowledge should be the exclusive province of the divine; like white supremacists in the Jim Crow era, they believed that shared access to the fountain would tarnish their own privilege.  And so they sent a storm to disrupt Siddhartha’s concentration.

Like Satan in the Old Testament, a snake came to help.  Mucalinda, a cobra-like naga king, believed in equality – humans too should have access to knowledge.  The cobra’s hood formed a protective bubble around Siddhartha, protecting him from the storm.

Siddhartha gained knowledge.  He now knew that non-attachment would free humans from suffering.  Everything in this world is impermanent – in the very end, each speck of matter will be so far from every other that the entire universe will be dark, empty, and cold – and so our attachments can only bring us pain.  We must recognize that our transitory world will always leave us unsatisfied.  Even our moments of joy will fade – those fleeting bursts of dopamine aren’t enough to sustain lasting happiness.

To be free of suffering, we have to let go.

But I’m an assistant coach for the local cross country team.  I run with the kids.  We suffer – that’s kind of the point.

Attachment brings suffering, but, again – that’s kind of the point.

My favorite superhero right now is Deadpool.  Most heroes have powers that keep them safe from harm – spider sense, super strength, telepathy.  Deadpool’s power is simply the willingness to endure harm.  As though tattooed with the word THOLE down his neck, Deadpool knows that life will hurt and sardonically accepts it.

He briefly considers non-attachment.  When he learns that he has a daughter, he plans to stay away from her.  Distance might keep her safe from Deadpool’s enemies – and would keep him safe from emotional turmoil.

Instead, he lets himself become attached.  He will suffer; so will she.  But he’s decided that the pain is part of life.

When Deadpool meets a young woman who’s so depressed that she’s contemplating suicide, he doesn’t advocate non-attachment.  It’s true that her torments will be temporary, but that’s a Buddhist consolation.  Instead, he tells a joke (he justifies his levity by claiming that his powers came when he was “bitten by a sad radioactive clown”) and takes her to experience more pain and suffering. 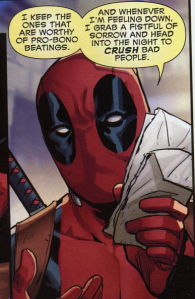 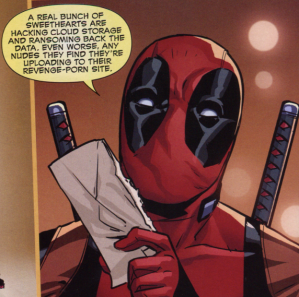 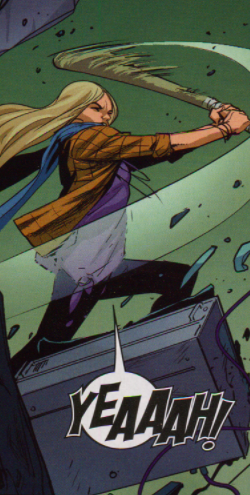 My own depression has seemed more manageable for similar reasons.  Since I’ve been working with people entrapped in the criminal justice system, I experience more pain.  More horrors are shared with me now.  But that very sharing connects me more clearly to the world.

Those connections – attachment – will bring suffering, but that’s the very stuff of life.  All you can do is endure.  As the chemist Primo Levi wrote in If This Is a Man, his account of time spent in a Holocaust concentration camp (translated by Stuart Woolf), as long as you can resist becoming too absorbed in your tiny experience of the present moment, there is always cause for hope:

It is lucky that it is not windy today.  Strange, how in some way one always has the impression of being fortunate, how some chance happening, perhaps infinitesimal, stops us crossing the threshold of despair and allows us to live.  It is raining, but it is not windy.  Or else, it is raining and is also windy: but you know that this evening it is your turn for the supplement of soup, so that even today you find the strength to reach the evening.  Or it is raining, windy, and you have the usual hunger, and then you think that if you really had to, if you really felt nothing in your heart but suffering and tedium – as sometimes happens, when you really seem to lie on the bottom – well, even in that case, at any moment you want you could always go and touch the electric wire-fence, or throw yourself under the shunting trains, and then it would stop raining.

You could always kill yourself later, Levi says, so why not see how much more you can bear?

And, yes, Deadpool takes the young woman to the hospital.  When one of my acquaintances needed to go, I took her in as well.  (I was on the phone with my father: “Just lie to her, tell her anything, but get her in.”  I keep the volume on my phone loud enough that she heard everything he said.  At least it was something to laugh about.)

Hang in there.  The suffering won’t change.  But you might.