On explaining religion to my child, part one.

One day at nap time, my two-year-old daughter riveted awake and said: “I’m worried about ghosts.”

I know, I know.  The fact that she wouldn’t sleep is normal.  Hundreds of children books have been written about children refusing their naps or failing to settle down at night and go the ____ to sleep.  But I felt that this worry was fixable.

The day before, I’d read a book to her that had a ghost.  I thought she was old enough!  And I made silly noises!  She laughed and seemed unperturbed!

But then she worried.  That dark, dark chest had a ghost inside?  Where else might ghosts be lurking?

“There was a ghost in that story,” I said, “but it was only a story.  Ghosts are only ever in stories.  They’re not real.”

She eyed me warily, but, still, she lay down and slept.

Two hours later, she lurched awake and announced that she’d made a song.

“Of course I want to hear it!”

“Ghosts are pretend,” she intoned, over and over to no discernable tune.  I smiled, and she hopped off the mattress and began to march around the house, still singing.  I heard that song many times over the next few months.

Because she seemed to understand ghosts so well, I used that same language the next year when she asked me about Christmas.

“Some people tell stories about big sky ghosts above the clouds, watching us.  There’s a story about one of the sky ghosts, a sky ghost named Yahweh, who had a human kid.  So Christmas is a festival when people celebrate the sky ghost kid.  Like your birthday, kind of.”

In my first explanation of Christmas, I didn’t include anything about penance.  She was only three years old, after all.  That’s a little young for the canonical version –  Jesus, the sky ghost kid, has to suffer as a human in order for the rest of us humans to be forgiven.

And it’s certainly too young for John-Michael Bloomquist’s beautiful (and far more logical) re-imagining, in which Jesus, a human incarnation of God, has to suffer in this form in order for us humans to forgive God.  In “The Prodigal’s Lament” Bloomquist writes that:

I think Christ died for us

to forgive his father, who until he became a man

and dwelt among us had no way of knowing

Now my daughter is four.  And she’s still interested in religion.  One day after dinner recently, she asked, “Can you tell me more sky ghost stories?”

“Naw, dude, I can’t tell you all of them.  There are so many that … even though I don’t know them all … even though I only know a small, small bit of all the stories … I’d be talking for days!”

“Then tell me the sky ghost story about the snake again.”

I’d previously told her about Siddhartha meditating beneath the bodhi tree, sheltered by Mucalinda.  She heard that story just before bedtime, and promptly wrapped herself with a blanket like a cobra hood and scampered around the house chanting, “I’m Buddha!  I’m Buddha!”

“How about this, I’ll tell you four short sky ghost stories about snakes.  Does that sound fair?”

“So, this first one is from Sumeria.  It’s hot there, a desert now.  And in their sky ghost story, a prince named Gilgamesh … “

Yes, I know, Gilgamesh would be more accurately described as a king.  But countless Disney films have trained American children to think that princes and princesses are the ones who romp off for adventure.  Even though our daughter has only seen Moana, she knows all the other characters from talking to her friends.

“… had a best friend named Enkidu.  But then Enkidu died.  They couldn’t play together anymore, so Gilgamesh felt sad.  He wanted to find a way for people to never die, so he went on a long journey and found a potion, a special drink that would make people live forever.  But then he took a nap, and a snake drank the potion.”

“It’s just a story potion, it’s not real, but people told that story because they saw snakes shed their skins and thought that meant they lived forever.  But really it’s because snakes, when they’re growing, shed their skins all at once.  Humans shed our skin bit by bit all the time.”

She glanced down at her arm.  It didn’t look like it was shedding.

“And the next story you know, about Buddha.  Because there was a prince named Siddhartha Gotama living in a fancy palace, and things were pretty nice inside the palace.  But one day Siddhartha took a walk outside and saw that other people weren’t happy, they were sick or hungry or sad.  So instead of going back inside the palace, Siddhartha wanted to think about ways for people to be less sad.  He sat for a long time under a tree, just thinking.  He sat so long that a real person would need to stop to eat, or sleep, or drink water, or use the bathroom …”

She is learning that even when you’re doing something really important, you still have to take breaks to use the bathroom.  Otherwise you wind up needing new pants.  Every week we have so many loads of laundry to put away.

“… and some other sky ghosts saw him sitting there, thinking.  And they realized that he was going to learn their special sky ghost secrets.  These sky ghosts weren’t very friendly.  They thought that if they shared their things with other people, they’d have less.”

Hold it tight and you won’t have any.

Lend it, spend it, and you’ll have so many

They’ll roll all over the floor.

“The sky ghosts decided to make a big storm so that Siddhartha would have to stop thinking.  He’d get all wet, or need an umbrella, or have to go inside.  But a snake, a naga sky ghost, Mucalinda, saw the storm coming and decided to help.  The snake wrapped his big, big hood around Siddhartha to make a bubble, like a tent, so that he could still sit and think as though the storm wasn’t even there.”

I didn’t mention my dissatisfaction with the ideas Buddha eventually came up with.

“And in the next story, from the Hebrews, a sky ghost named Yahweh made a human out of dirt, and then …”

“ … or, no, better the version from the Quran, where Yahweh made two people out of dirt, a mother and a father, and let them live in a garden where there were so many fruit trees, fruits with such a perfect mix of amino acids that humans wouldn’t need to eat anything else.  And there were two super special trees, one that would let anybody who ate it have knowledge and one that would make people live forever.  Yahweh thought that those two were the best trees, but he was a jealous ghost, he didn’t want to share.  So he told the humans not to eat any fruits from those special trees.”

We have plenty of rules in our house, but I’ve promised my daughter that if she asks why there’s a certain rule, I have to explain it to her as soon as there’s a safe chance to do so.  And I’d be remiss in my parenting duties if I told her that in the day that thou eatest Oreos before dinner thou shalt surely die. 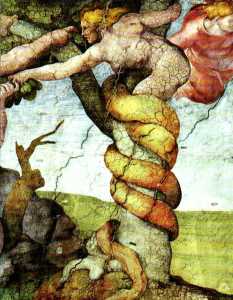 “Then a snake came and explained to the humans that Yahweh was being mean and making up a story, that if they ate the fruit from those special trees they wouldn’t actually get sick.  So the humans ate fruit from the knowledge tree, but then Yahweh saw them and locked them out of his special garden before they could share his live forever tree.”

She frowned.  Two of her grandparents have died; even though we tried to make passing seem normal, she probably understands why so many of the sky ghost stories are about wanting to live forever.

“And then your last sky ghost story for tonight … this one is from a place that’s often really cold, up north where nights are long in wintertime.  In that story there’s a sky ghost named Loki, a trickster ghost like Maui from Moana, and he was always making mean jokes.”

“But why was Loki mean?”

“Well, sometimes people told stories to show what not to do.  Loki made mean jokes and in the end bad things happened to him, to help teach kids not to make mean jokes anymore.”

“But one time, early in the story, before he’d done too many mean things, Loki had some kids.  But the Loki kids weren’t humans, one was a skeleton and one was a big wolf and one was a big, big, big snake.  And, well, you know that our planet is like a ball, right, but back then they didn’t know for sure, and they thought it might look more like a swimming pool.  So they thought something had to be around the edges, and they figured it was a big, big snake who circled around the world and held in all the water.”

“And then what did the snake do?”

Um … I didn’t want to answer that one.  The Midgard Serpent doesn’t actually do much.  Thor mistakenly tries to pick him up during a bet in a giant’s castle once, and then tries to pick him up again when he’s out fishing, and then finally bops him on the head during Ragnarok … and that time gets poisoned and dies.

“We’ll borrow some more sky ghost books from the library and find out,” I told her.  “But now it’s bath time!”