On fruit, welcome, and undergarments.

I’ve heard that durian is the king of fruits.  Unfortunately, it smells and tastes of rotting onions.  I’ve heard also that it’s an acquired taste; my single serving was surely insufficient to acquire it.

I far prefer dragonfruit, which is the most striking fruit I’ve seen.  A hot pink exterior, the insides white speckled with dark black seeds.  For over a decade, I carried a small photograph of a dragonfruit in my wallet, the fruit resting atop a piece of paper with the scrawled words MY PICTURES ARE DARK BECAUSE I’M A DARK PERSON.

My roommate Bonnie took the photograph.  Her pictures were dark.  The dragonfruit was shown in black and white – even sans pink hue, it looked bizarre.

King Charles II (1630 – 1685) would’ve flipped his shit to see a dragonfruit.  In the painting below, he flaunts his magnificent wealth by accepting a pineapple. 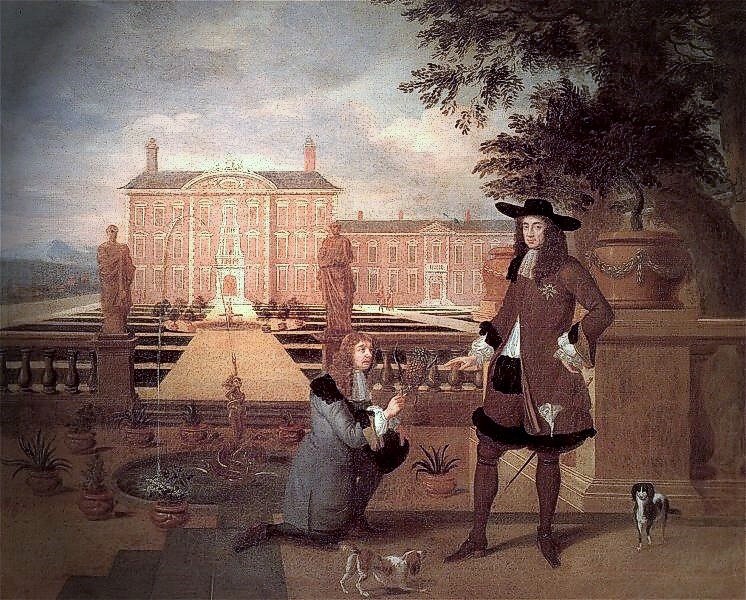 When European travelers began spreading zoonotic plagues to the Americas, they encountered a wide variety of new foods.  They were most impressed by the pineapple, in part because it couldn’t grow in Europe and rarely survived trips across the Atlantic without succumbing to rot.

Since many people heard rumors about the fruit without tasting it themselves, they imagined it to be mythically delicious.  (Similar, perhaps, to my own fantasies about the mangosteen, which I learned about during college – it was illegal to import mangosteens into the U.S. because our Department of Agriculture feared that shipments would harbor an Asian fruit fly.  Several of my friends drove to Canada to try it, but I didn’t have a passport.)

Because pineapples have such a distinctive appearance, they were used as a symbol to denote luxury and opulence.

Hotel owners soon realized that it was cheaper to emblazon their signs with pineapples than to offer real luxury.  Over time, the symbol’s misuse caused it to take on a slightly different meaning, one of hospitality and welcome.  It’s like the way that long misuse of the word “soon” (original definition: “immediately, at once”) gave it the denotation we know.

(“Soon” was replaced by “now,” but this word’s meaning is drifting too – when we need something done “immediately, at once,” we say right now!)

Some of our neighbors sport pineapple flags fluttering on their porches: come in, all are welcome!  Other homes have pineapple door knockers, or wooden pineapples carved into the entryway.  Although the fruit itself can be purchased year-round in moderately fancy grocery stores, the symbolism remains.

And so we broke out in laughter while walking through our local Target and saw a rack of iridescent boxers bedecked with golden pineapples.  Perhaps intended for the amorous: come in, all are welcome!