On Tao Lin’s ‘Trip,’ targeted advertising, and finding scraps of life in books.

I recently borrowed my local library’s copy of Tao Lin’s Trip.  I read ten pages before a business card fell out.  I didn’t find the other until about a hundred pages later.  The cards were really crammed in there – I often read at nap- and bedtime, lying on my back, with little feet kicking my books, belly, neck, etc.  I’m surprised the second card wasn’t ejected earlier.

In Trip, Lin writes about drugs and some of the people who frequently ingest them.  For instance, Lin spent several months reading the oeuvre of Terrance McKenna, a passionate advocate for the legalization of psychedelic drugs (which I support) who argued that his chemical-induced visions (language elves, fractal time) represent tangible features of our universe (which I think is asinine).  At other times, McKenna self-described as a “psychonaut,” which I think is a better term – compounds that perturb the workings of a mind do reveal truths about that mind.

In an undergrad-designed psychology experiment, the perturbation might be to compel a study subject to think about death by mixing a lot of photographs of car wrecks into a slide show.  Does a person exposed to these images seem more inclined to spend time with close family members (based on the results of a 30-question survey) than equivalent study subjects who were instead shown photographs of puppies?

Maybe you’d learn something from that.  But, honestly, 0.5 mgs per kg of psilocybin is a more powerful perturbation.

(A man who has been attending my poetry class for the past few months also self-describes as a Buddhist psychonaut – his favorite psychedelic is LSD, but he also struggles with a nagging impulse to shoot heroin.  He’s a vegetarian and has been writing poetry for twenty years, ever since his first friend died of overdose.  The only way for him to avoid prison time is to enroll at a court-mandated Christian-faith-based rehabilitation clinic where everyone works daily at the Perdue Meats slaughterhouse.  He’s just waiting on a bed before they ship him out there.  Personally, I think that having a recovering addict decapitate hundreds of turkeys daily would be an unhealthy perturbation of the mind.)

As Lin researched pharmacology, he realized that he’d made the same error in thinking about his body that our society has made in thinking about our environment, especially the oceans.  He’d assumed that his body was so large, and each drug molecule so small, that he’d be relatively unchanged as the pills he swallowed were metabolized away.  But he was wrong.  He’d turned his own body into a degraded environment that felt terrible to live inside.

He realized that corporations shouldn’t have free license to destroy the world that we all share.  And he realized that he needed to practice better stewardship of his body, his own personal environs.  He changed his diet and his lifestyle and no longer felt like garbage all the time.

Lin also provides some useful information about this country’s War on Drugs.  If someone was looking for an accessible way to learn more about this, I can see myself recommending either Trip (for the dudes in jail) or Ayelet Waldman’s A Really Good Day (for the harried parents working alongside me in the YMCA snack room).

And those business cards?  They made convenient bookmarks.  Verdant green, the front advertised a local hydroponics supply store, the back listed the store manager’s name and telephone number.

This seemed like a great advertising strategy.  Much more precise (and less evil) than Facebook’s targeted ads.

I won’t be buying any hydroponics supplies, but I’ll probably put those business cards back before I return the book.

Most of what I’ve found in books has been less directly relevant to the subject matter.  I felt dismayed to find a business card for a local artist / writer / model / actor – the front showed her in pinup-style undergarments with the cord for a video game controller entwining one stockinged leg – inside a library copy of Against Our Will by Susan Brownmiller.

When I flipped through one of Deepak Chopra’s new-age self-help books (that I pulled off the secondhand inventory shelf at Pages to Prisoners to mail to someone who’d requested stuff about UFOs, Wicca, and conspiracies), I found a Valentine’s Day note (written by a small child in crayon) and a polaroid of a tired-looking bare-breasted woman staring  at the camera from atop a camper’s bed.  MWPP totally would’ve gotten dinged if I’d mailed the book with that picture still inside.

And I’ve written previously about the time I found an acceptance letter from Best of Photojournalism inside a previous year’s edition of the book as I selected books to mail to a prisoner interested in photography. 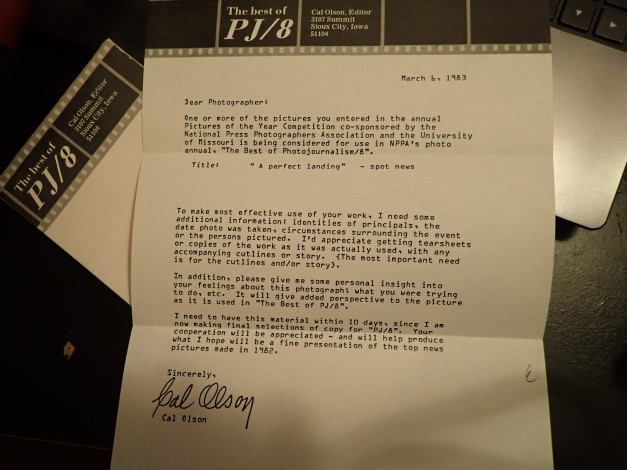 … or that I then put together a package of books to send to that photographer, because it turned out that he was also in prison after murdering his son-in-law.

The impression I got from news reports was that this man had a daughter whom he’d raised alone.  When his daughter was 13 years old, she fell in love with an abusive, oft-unemployed 19-year-old.  She soon became pregnant.  As it happens, this boyfriend took too many drugs.  I’ve met many men in jail who are totally charming while sober but (“allegedly!”) wail on women when they’re not.  Some are quite frequently not sober.

During this man’s trial, several witnesses testified to the violent physical abuse his daughter was subject to.  His daughter’s boyfriend “would grab ____, jerk her by the face, force her to go places, cuss her out if she didn’t do the right thing … “

Not that this is a reason to shoot somebody.

Still, I wondered how a book from the man’s personal library had wound up in the inventory of the Pages to Prisoners bookstore.  The murder occurred in August of 2012.  Mid-autumn, 2015, his book was on our shelves.

I like to imagine that his daughter made the donation.  That perhaps, by then, she’d forgiven her father.  That she’d realized how miserable U.S. incarceration can be and wanted to do a little something to make it better.

I certainly hope that his book helped people at the prison where I sent it.