On power and dignity in defeat.

Winning is pretty easy.  It takes effort to get there, but once we’ve done it, most people can act with grace.

It reveals more about a person’s character to see how they handle defeat.  In the Christian bible, Jesus is a more compelling character than Yahweh.  Jesus faces adversity, which sometimes he accepts calmly – he willingly submits to crucifixion despite knowing in advance that he has been betrayed – and sometimes heatedly – braiding a whip when he’s angered by commerce in the temple. 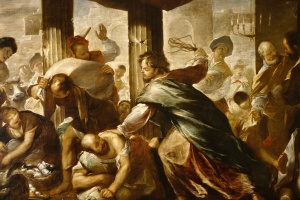 So, sure, Jesus loses his temper.  Don’t we all?  It’s understandable to lash out when unconscionable behavior seems to be taking over the world.

Which is why, when Jesus rages, he still seems like a sympathetic character.  But when Yahweh does it, He seems small and petty.  After all, Yahweh is omniscient.  Omnipotent.  He always wins, and yet he’s still jealous and wrathful.

In Norse mythology, every champion is shown both at moments of glory and in defeat.  The latter episodes let us see the true depth of their strength.

In Laughing Shall I Die, Tom Shippey writes that:

Losing is a vital part of the Norse belief structure.  Ragnarok is like Armageddon, the battle at the end of the world.  In it the gods and their human allies will march out to fight against the frost giants and the fire giants, the trolls and the monsters.  And in that battle – and this is not at all like Armageddon – our side, the good guys, will lose.  Thor will kill the Midgard Serpent, the great snake that coils round the world, and then drop dead from its poison.  Odin will be swallowed by the wolf Fenrir.  Heimdal and the traitor god Loki, Tyr and the great hound Garm: both pairs will kill each other.  Frey, left swordless, will fall before the fire giant Surt, who will then set the world ablaze.

The gods know this is going to happen.  That is why Odin habitually betrays his own chosen heroes to death, and this is where the myth of Valhalla comes in.  Odin wants his best heroes dead so he can collect them in his own Halls of the Slain (Valhalla), where they will fight each other every day, for practice, and come back to life-in-death at the end of every day, to feast.

The myths had a built-in answer for, “Why do bad things happen to good people?”  The Norse imagined that gods betrayed their champions in life because they needed allies in death.

Odin knows Ragnarok is coming, but since he does not know when, he wants his team to be at all times as strong as possible, even though the result is foreordained.  Even the gods will die, and their side will lose as well, and they know they will.  But this does not make them want to negotiate, still less change sides.  Refusal to give in is what’s important.  It’s only in ultimate defeat that you can show what you’re really made of.

All this shows an attitude to winning and losing markedly different from ours.  To us, calling someone ‘a loser’ is seriously insulting.  This must be the result of 150 years of competitive sport.  All modern games start off by imposing fair conditions.  Same numbers on each side, level pitch, no ground advantage, toss a coin at the start for choice of ends in case there is some advantage, change ends halfway through to cancel any such advantage, umpires and referees to see fair play – all the rules are there to see that the better team wins.   So if you lose, you must have been inferior in some way, strength or speed or skill, and if you lose consistently, then there’s something wrong with you: no excuses.

Worse, our culture is so permeated with the ethos of sport that we mistakenly believe every victory reveals moral worth.  Ayn Rand argued that financial wealth revealed a person’s merit; many contemporary politicians have been suckered into the same beliefs.

Vikings were wiser.  They knew that in the real world, conditions aren’t fair.  Heroes may be outnumbered, betrayed, trapped, caught off guard or just plain run out of luck.  That doesn’t make you what we call ‘a loser.’  To their way of thinking, the only thing that would make you a loser would be giving up.  And there’s another factor, perhaps the most distinctive thing about the Viking mindset.

The heroes of the Viking Age, both gods and men, fixated as they seemed to be on death and defeat, just did not seem able to take death and defeat seriously.  Unlike the ponderous heroes of the classical world, they kept on making jokes, coming out with wisecracks.  To them, the throwaway line was another artform.  They had no sense of their own dignity.  Or maybe, they had such a strong sense of their own dignity that they felt no need to stand on it.

Finally, and combining the attitude to losing with the attitude to joking, what was especially relished in story after story was the stroke that showed that the hero hadn’t given up, even in an impossible situation.  What was best was showing you could turn the tables, spoil your enemy’s victory, make a joke out of death, die laughing.

People who think like that, one may well conclude, can be beaten by superior force, but though they can be killed like anyone else, they are impossible to daunt.  If they’re alive they’ll come back at you, they’re not done until they’re stone dead; even if they’re dying or helpless they will try to think of some trick, and if you fall for it, then the joke’s on you.

Viking humor.  Their secret weapon.  Part of their mindset.  Take warning, though!  There’s a mean streak running through it.

The Midwest Pages to Prisoners Project receives many requests for material about Norse mythology, but unfortunately we rarely send any.  White supremacists decided that the Norse myths should underpin their religion, and so current publications of these materials are often laced through with racism and hate.  I’ve (slowly) been preparing my own anti-racist pamphlet about the Norse myths, though, because many are lovely stories.  And the above passage seems like it could be quite helpful for many of the people who get caught in our nation’s criminal justice system.

In jail, we often read Julien Poirier’s poem “Independently Blue,” which opens with the lines:

in a beautiful city.

Things have worked out nicely for you,

and you think everyone can agree

this is the greatest country on earth.

The people who are “winning” in our country – the wealthy, the comfortable – rarely began on an even playing field with everyone else.  Their patriotism costs little.  Why wouldn’t you love your country if it provided you with everything?

There’s a chance that Deadpool’s current popularity is due to the fact that so many people feel like they are not winning at life right now.  After all, Deadpool’s superpower is the ability to suffer with a smile.  He’s a hero who embodies the ethos of Norse mythology, willing to joke about his own failures.

A hero is defined not by victory but by defeat.  Only in defeat can you show what you’re really made of.  Only in final defeat can you show that you will never give in.  That’s why the gods have to die as well.  If they did not die, how could they show true courage?  If they were really immortal and invulnerable, who would respect them?

At a time when so many people feel as though the world is stacked against them, seeing Superman score yet another preordained victory isn’t so compelling.  Better to root for a loser, to see Deadpool grin through a mouthful of cracked teeth and make one more bad joke before he passes out.

Especially for people in prison and jail.  Many were born into crummy situations.  After they’re released, they’ll have to navigate the world with huge additional burdens impeding their efforts – if you haven’t read it, you should check out poet Reginald Dwayne Betts’s lovely essay about trying to become a lawyer despite having been convicted of a felony when he was a kid.

I hope the people we’ve incarcerated manage to carve out some form of success.  We should want that for everyone.  People can grow and change; why not do what we can to help others change for the better?

But maybe these people will not win.  Maybe they’ll submit dozens of job applications but receive no interviews.  Maybe nobody will want to give them a second chance.

That is, unfortunately, the way it often happens.

Would defeat hurt less if we celebrated myths in which our heroes suffer, too?  And not just the way Jesus suffered, undergoing a torturous death as a trial before his ultimate ascension.  What would our world be like if we venerated gods who died with no hope of rebirth or redemption?

“Americans love a winner and will not tolerate a loser.”

But people at the bottom are strong, too – often stronger than those whom fate allowed to start at the top and stay there.  Our world will be a better place once we learn to show kindness to those who actually need it.