Dolphins, like humans, fool around throughout the year.  But dolphins, unlike humans, can conceive only during certain seasons.

(After writing the preceding sentence, I wanted to mention which seasons.  I typed “when can dolphins conceive” into my search bar.  The top hit was a website called Can Male Dolphins Get Pregnant, with the blurb “There will be nothing you can do about it but pray.”  I clicked the link.  The page instantly re-directed to a website called Trusted Health Tips featuring a “new groundbreaking online video that reveals how to get pregnant,” alongside the disclaimer that “pharmaceutical and fertility companies have requested the government to ban” the video, since it would clearly destroy their businesses.  Our generation is the first to have all the world’s knowledge at our fingertips!  We are like gods, are we not?)

Dolphins, like humans, are attracted to a wide range of sexual partners.  Pairs or trios of males form long-term strategic alliances, and they will engage in “psuedo-sexual” behavior with their allies.  Presumably one or both of the participants finds these activities pleasurable.  They’ll tumble with females, and males, and humans, too.

As best we know, dolphins hold no negative stereotypes against those who pursue consensual pleasure, no matter what form it takes.

I’ve felt surprised, when discussing sexuality in jail, that so many men who’ve spent time in prison still use starkly binary terminology.  I’ve never heard anyone use the word “bisexual” in jail.  Instead I’ve heard things like, “I’ve got nothing against people who want to be gay.  It’s not for me, but I’ve got nothing against it.  What gets me is when people who I know are gay, who I saw be gay inside, they get out and want me to back up their lies that they’re not.  I’m like, excuse me, I know you’re gay, so how can you ask me to tell somebody that you’re not?”

At another class, we discussed human sexuality throughout history.  Physical affection was encouraged among the troops of ancient Rome, with the idea that a soldier might fight more fervently to protect his lover than his country.  Japanese samurai were considered unrefined if they didn’t savor the occasional dalliance with another male.  (I refrain from describing the samurai’s encounters as “sexual,” because many were not consensual by contemporary standards – the objects of their desire were often too young.)

In many cultures, if someone was so persnickety that he had sex exclusively with women, despite spending long periods of time surrounded only by other men, he’d be seen as deviant.

One of the guys interjected, “Yeah, but what they were doing wasn’t, you know, cause I heard you’re only gay if your testicles touch.”

This was immediately disputed.  “No way – there’s positions with two guys and a girl where your testicles touch, and I know for a fact that don’t make you gay.”

My co-teacher and I sighed.  We’re both long-haired, relatively effeminate men, typically dressed in some measure of women’s clothing – every pair of pants I own comes from either the Indiana University dumpsters or the women’s department of Goodwill, and the same is true of most of my co-teacher’s jackets.

But my co-teacher and I live in a world where ambiguity is safer.  The way we punish people in this country carves away the nuances of people’s personalities – immersed in violence, they’ll need friends, but people are shuffled so often that there’s little time to build friendships.  They make do with communal identity instead.

When people were talking over a young black man as he read a poem, they were shushed by a convicted murderer covered in Aryan Brotherhood tattoos.  The tattooed man never seemed particularly racist.  He was very well read, and often mentioned things he’d learned from reading The Quran or Confucius.  But he was socially a white supremacist.  A pragmatic choice for a dude who’d spent eighteen years in prison.  At cafeterias under AB control, he’d get to eat.

Likewise, no matter who men fool around with, most choose to identify as socially heterosexual while they’re inside.

(A lovely quote from Morgan Freeman that I first saw as an epigram in CAConrad’s While Standing in Line for Death: “I hate the word homophobia.  It’s not a phobia.  You are not scared.  You are an asshole.”)

Our world didn’t have to turn out this way.

In the poem “Gilgamesh,” Spencer Reece documents the slow crumbling of an affair – the poet fell in love with a man who desires only the young.  As Spencer ages, the romance fades.  This man wants only to recapture the love that was denied to him in youth.

This instability is tragically common – Spencer’s paramour was raised in a culture that considered all sexual desire to be sinful, and homosexual desire especially so.  Even outside prison walls, we consider certain ambiguities too fraught to tolerate:

to write Genesis, they say, the writers

found all kinds of things, including

the epic about Gilgamesh, much of it damaged,

regarding the man who saw into the deep.

about Gilgamesh and Enkidu

What a different world we’d have if our sacred books taught that love was love was love.  People could comfortably be all of themselves. 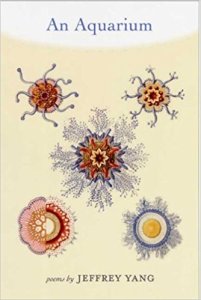 In his poem “Dolphin” from An Aquarium, Jeffrey Yang writes that

were once men.  The Chinese

river dolphin was a goddess.

Scientists tell us that if we

rearrange a few of our genes,

that be real progress!