Heartbreak smells the same in any language.

During my second year of graduate school, my advisor wanted me to do an organic synthesis using cyanide.  I’ve long since forgotten what we were trying to make.  All I remember is that I promptly said:

I actually, I had no idea whether I could smell it.  Still don’t, since my advisor fired me before I got around to that synthesis.  I was just riffing on the opening to Gabriel Garcia Marquez’s Love in the Time of Cholera (translated by Edith Grossman):

It was inevitable: the scent of bitter almonds always reminded him of the fate of unrequited love.

It doesn’t matter whether you call it heartbreak or desengano amoroso or any other name – it’s going to hurt.

Kids needs to learn about heartbreak.  They will feel sorrow.  Especially while they’re in high school, tugged by turbulent emotions but inept in so many ways … like conversation, like forbearance, like patience.

I know I was miserable during high school.  And, yes, the wellspring of my misery was my own incompetence.

Reading more would have helped.  Engaging fiction bolsters emotional maturity.  When we empathize with characters in books, we might skip some of their suffering – we can’t learn without making mistakes, but fictional characters can make mistakes for us.

And so we expect high schoolers to read stories of heartbreak, things like Ethan Frome, Romeo and Juliet, The Great Gatsby … novels in which intense emotions are described in school-appropriate language.

This is heartbreak.  Learn it well, young person.  You too will hurt.

Marcel Proust wrote a scene for In Search of Lost Time (translated by C. K. Scott Moncrieff) in which his narrator tumbles in the park with his first love, grasping after a letter she is holding.

… and we wrestled, locked together.  I tried to pull her toward me; she resisted; her cheeks, inflamed by the effort, were as red and round as two cherries; she laughed as though I was tickling her; I held her gripped between my legs like a young tree that I was trying to climb; and, in the middle of my gymnastics, when I was already out of breath from the muscular exercise and the heat of the game, I felt, as it were a few drops of sweat wrung from me by the effort, my pleasure express itself in a form I could not even pause for a moment to analyze; immediately I snatched the letter from her.  Whereupon Gilberte said, good-naturedly:

At that moment, Marcel, the character, was no longer interested in wrestling.  He’d rubbed his pelvis against her body enough to climax in his pants.  Now he “wished only to sit quietly by her side.”  It would be a few hours, perhaps, before he desired her again.

He felt joy that afternoon.

But then, months later, that same joy stabs him.  Their relationship has ended.  Marcel fancies himself indifferent.  Then, one day, he sees her walking alongside someone else – suddenly he is in pain.  The memories of his own happy times with her swell unbidden:

The accident comes from the side to which one was not paying attention, from inside, the heart.  Giberte’s words: “If you like, we might go on wrestling,” horrified me.  I imagined her behaving like that, at home perhaps, in the linen closet, with the young man whom I had seen escorting her along the avenue des Champs-Elysees.

He loved that she loved him.  He hates that she might now love another the same way.

But … how many high schoolers will sit down and read In Search of Lost Time?  I certainly didn’t.  Proust’s words would help, but they don’t reach young people.

I did, however, read certain paragraphs from John Fowles’s The Magus again and again at night. 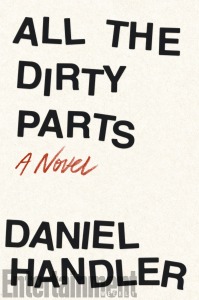 And so Daniel Handler has written All the Dirty Parts.  When he was growing up and making his first forays into the “grown up” section of the library, Handler gravitated toward books with racy scenes.  Which is why his heartbreak novel is full of them.

Heartbreak hurts in the chaste language of Ethan Frome … but it hurts just as much in the ribald language of All the Dirty Parts.

– You found it right away.

Or, on the same page:

– Pornography lied to us.

– OK but let’s watch another one first.

The protagonist of Holder’s All the Dirty Parts is a pornography-obsessed high schooler who proffers graphic descriptions of his conquests.  But he too has a heart.  And when he meets someone more callous than he is, he is doomed.

She repeats this in the tone of what’s-the-problem-officer.  I already thought it might not work, to ask her.

– Do we need a permit?  Do I have to pay for the whole year up front?

– I was just asking.

And, like a sock to the stomach, I get how every previous girl felt looking and asking that question, officially, at me.

They’re in high school.  Their relationship won’t last forever.  Which she knows.

So should he, since she is treating him the same way that he has treated everyone else.

And then, like Marcel, the protagonist of All the Dirty Parts will feel crushed remembering their embraces … knowing that now she is now sharing them with someone else.  Worse, by the time he loses her, he has behaved so badly that he has no one to talk to.  He sits alone in his room and ruminates:

I wasn’t just a fuck to them, any of them probably, is what I’m seeing.  For every girl I thought I was uncomplicated sex, it wasn’t.  Put it this way: if you can’t see the complication, you’re probably it.

And the book ends beautifully, with a pearl of wisdom, some words to live by delivered deus-ex-machina-style by an adult.

And, yes, I’m sorry for all the high-schoolers out there, and the kids who aren’t in high school yet but are gonna be: it will hurt.  There might not be anyone you feel like you can talk to.

At least Daniel Handler wrote a book for you.