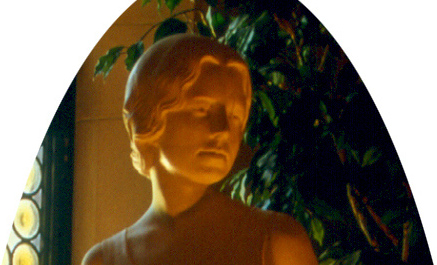 In Donnie Darko, kids call a woman in town “Grandma Death.” She’s a feature of the landscape. An object. Interesting to watch sometimes – there she is, hobbling across the street to check the mail – or talk about at dinner.

I didn’t realize she was still alive until we almost hit her with the car.

Donnie Darko’s life changes when he realizes that “Grandma Death” isn’t an object, but a person. She wrote a book. She has hopes and dreams. Donnie writes her a letter, hoping to start a conversation.

My family lives in a small town. There are two high schools – my spouse teaches (excellently!) at one of them.

And yet, even though this is a small town, her students often look surprised the first time we cross paths with them outside of school.

“Amazing, right?” my spouse will say. “Teachers don’t just sleep upside-down in their rooms like bats in a cave!”

Cognitive scientists discuss “theory of mind,” the understanding that other people have thoughts and feelings. Young children don’t seem to have this. If a child knows something, why wouldn’t everyone else know it, too? If a child doesn’t know something, then how would you?

A common test for “theory of mind” is to have a child watch the following scene: a puppet sees a treat hidden under a cup. The puppet leaves the room. The treat is moved. The puppet comes back, and you ask the child, “Where will the puppet look?”

Once upon a time, we humans thought that we were the only animals with a “theory of mind.” We aren’t. You can run variations of this experiment with crows, with octopuses. They pass. They know that other creatures know things.

At a fairly young age, most human children learn that other people possess information. They have brains that know.

It takes longer before we learn that others have brains that feel.

In Brian Phillips’s essay “But Not Like Your Typical Love Story,” he sketches a biography of the elderly woman who haunted his home town. For Phillips, she was part of the landscape. An object.

By the time he was in high school, Phillips understood that this woman had a story. She’d been fabulously wealthy, once – perhaps the wealthiest person in the world. She’d married her stepfather. Much later, lovelorn and lonely, she found herself giving money to a grifter, following him fruitlessly across the country. She returned to her home town and wore outdated clothes.

Phillips had lost his grandparents. They’d died tragically – alcohol, a boat on the lake, perhaps a heart attack. “The coroner’s best guess was that he had fallen out of the rowboat and my grandmother had drowned trying to save him.”

Phillips, growing up, wished he could feel something. He knew his grandparents wouldn’t be coming over anymore. He was nine. He understood what death meant.

But not how it felt.

By high school, Phillips understood so much more about the world. But, even then, did he understand how the world felt?

His favorite place was the museum devoted to the old woman’s life – the Marland Mansion, where she had lived when she was wealthy. Inside was a statue of her at twenty-seven, the year she married her fifty-three year-old stepfather.

Later still, after she’d died, secrets were told. That’s where I buried the statue. A curator went and dug it up. The pieces were reassembled. Phillips would stare at the reconstructed statue.

“I came close enough to see the pale lines crisscrossing [her] white stone face where the sledgehammer struck it. I tried not to notice them.”

As we grow up, we all learn that other people know. Typically, we become kinder in consequence.

If we’re lucky, we learn also that other people feel.

This will break our hearts.

But it’s also like cracking free from inside a shell. Our hearts break. And we can become good.