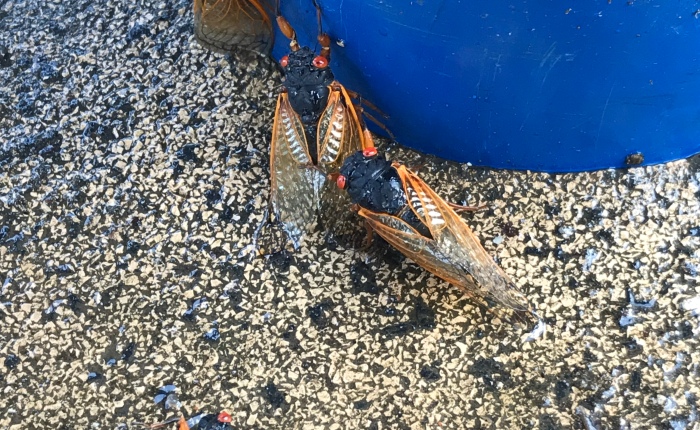 Here in Bloomington, the time of cicadas is drawing to a close.

Some trees are still fairly loud, with pulses of sound that pour down, compressing & rarefacting the air like the thrum of an alien turbine. But two weeks ago, the loudest trees were excruciating, with sound levels that could dispel all thought, inducing headaches & nausea as we walked beneath.

More & more often now, I’m able to pick out the plaintive kreeee of individual singers, their voices divorced from any chorus: males who arrived late to the party and are wondering whether any nearby females might be similarly tardy.

Molted exoskeletons still litter the ground, or cling to flowerstems & the lower bark of trees. But my kids are finding few fresh ones. Nearly all the cicadas who are going to emerge in our town this year have already done so.

My kids (like most kids) collected the shed exoskeletons. And each morning before school, they would search our carport for newly emerged adults – although it does feel strange to refer to cicada nymphs as somehow youthful when they’re a decade older than my eldest child. She cradled the bugs like babies; they were more than twice her age.

My kids would move the newcomers – bodies & wings still soft from metamorphosis – to a safe sunny spot in our yard. They’d be able to fly sooner, & our car wouldn’t squish them.

In the afternoon, we would go on walks – again stepping carefully to avoid squishing anyone – and we’d stop every few feet to inspect the cicadas whom we found.

And it was alarming. Most of the insects we encountered then were oddly shaped, with twisted legs or crumpled wings; or exceptionally small; or otherwise malformed. We found some who had only partially emerged from their exoskeletons and then stopped, trapped within their own old skin.

Which I can’t chide them for too severely. At times, we humans also have difficulty sloughing off our past selves.

They decompose. The air reeks now of an acrid ammonia tang. On certain sidewalks – beneath especially popular trees, those that a few days ago had been deafeningly loud – we walk through a bevy of corpses. Viscous goo spills from their split sides where other people have stepped on them.

And it’s interesting, the perspective that my children and I have had upon the cicadas’ lives.

For all those years, they were invisible to us, burrowing rootward through the soil and sipping the delectable sap of trees.

After the cicadas emerged, we still rarely saw the cicadas who were feeling actualized. Who were up high in the trees, singing, seducing, laying eggs, living their best cicada lives. Those who lingered on the sidewalks where we might find them had often suffered some mishap or misfortune. Cicadas whose heads had been bitten off by birds. Cicadas who were bamboozled by the sky’s reflection in a puddle or pool of water and plunged in to drown. Cicadas whose developmental differences left them unable to fly.

I felt really happy that my children, even after interacting with thousands of cicadas, still felt compelled to help each and every one. My children never stopped searching the carport to ensure that nobody would be squished. If any cicadas fell into nearby water, my children would splash in to the rescue.

But it felt strange for me, knowing the limits of our perception. As though some insects had visited a human hospital and drew all their conclusions about our way of being based on what they saw there.