I’ve written about contemporary gerrymandering, the effort to tweak our voting rights such that certain people’s opinions matter more than others’.

A preferred strategy to suppress votes is to draw district lines that allow one political party to narrowly elect many representatives, while the other party elects a small number of representatives with overwhelming majorities.  When this happens, votes in the landslide victories are “wasted” – those people’s preferred candidate only needed 51% of the vote, after all – which can allow a political minority to retain control. 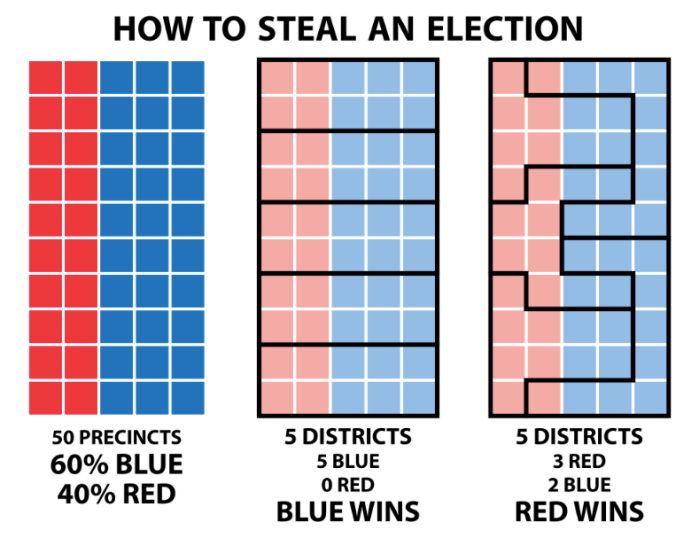 For example, each congressional district in Michigan represents approximately 700,000 people.  In the 14th, a serpentine district designed to suppress the influence of African-Americans by confining their votes to as few districts as possible, candidates can carry 80% of the vote.  This congressional vote represents the interests of approximately 560,000 people (700,000 * 0.8).

In other Michigan districts, candidates typically win with 55% of the vote.  In these districts, a congressional vote represents the interests of 385,000 people.  Their opinions are treated as time-and-a-half more important.

(With the sad corollary being that, in a representative government, the opinions of people who ascribe to minority political philosophies within each district are basically irrelevant.  My own congressional representative surely knows that I didn’t vote for him, that I won’t vote for him in the next election, and that there’s only a small chance that anything I say will sway the opinions of people who did vote for him.  So he shouldn’t care about my beliefs at all.)

Many people feel that the districting process is crummy.  In Michigan, citizens are attempting to wrest control away from professional politicians, but they’re fighting an uphill battle.  After all, our country was founded on the principle that some people’s voices opinions do matter more than others’.

That’s why we have a constitutional republic instead of a democracy.  In a democracy, the uneducated rabble could undermine the will of the self-styled luminaries who wrote the constitution.

Women couldn’t vote.  Black people (“others,” who counted as 60% of a human being when doling representation) couldn’t vote.  And although it’s anachronistic to use the term “gerrymandering,” the United States Senate was designed to bloat the voting rights of those intent on dastardly evil.

Almost everyone involved in writing the U.S. constitution believed that rape, murder, torture, and abduction should be permissible (as long as the victims matched certain criteria).  But some of the signatories were more enthusiastic about these practices than others, and those individuals worried that the nation’s citizenry might eventually decide that rape, murder, torture and abduction shouldn’t be allowed. 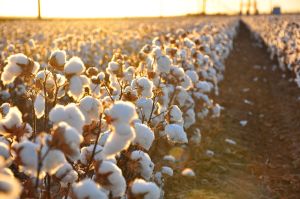 After all, not everyone held a monetary stake in the nation’s predominant industry. It’s easier to justify torture when we’re making money off it – we still do.

Voting in this country was never meant to be fair.  Lo and behold, it still isn’t.

I was planning an essay on cell phones and surveillance.  The central thesis was that our Supreme Court is a massively flawed institution.  Many of our current Supreme Court justices are both willfully ignorant and opportunistically illogical.  This set of people are not exceptionally knowledgeable, nor are they particularly clever.  But we have given them extraordinary power to shape our world.

I will still write that essay – Carpenter v. United States is definitely worth discussing – but shortly after I prepared my outline, the Supreme Court released a slew of misguided, malicious decisions.  And then Anthony Kennedy – who is already a pretty crummy jurist – announced his resignation.  A narrow-minded ideologue will be nominated to replace him.

Last weekend, people gathered across the country to protest recent developments at our nation’s immigration detention centers.  And I couldn’t help but think that the protesters’ energy and enthusiasm was misdirected.

Don’t get me wrong – wrenching families apart is awful.  Every citizen of this country should feel ashamed that this is being done on our behalf, and we should want for it to stop.  It’s worth being upset about, both these new developments at immigration detention centers and when families are severed because the parents were incarcerated for semi-volitional medical conditions like drug addiction.

(To be fair, living with addicts is often also horrible.  It’s a point of pride among people in jail if they kept clean while their kids were young.)

In My Brother Moochie, Issac Bailey writes beautifully about the harms suffered by millions of families across the country:

As a member of the perpetrator’s family … you don’t know what you are allowed to feel, or think.  Victims can mourn, and others will help them mourn.  When prosecutors and pundits talk about justice, they are referring to victims and their families, not families like mine.  Why should anybody give a damn that the ripple effects of crime change our lives, too?  We don’t get to mourn.  We don’t get to reflect, at least not fully, not publicly.

To stand by a man you love after he has done something dastardly is to be accused of having a lack of respect for what the victim has endured.  To demand that he not be known solely by his worst act is to be accused of excusing evil.  To not be there for him would feel like a dereliction of familial duty, a betrayal of the worst order.  To state the truth – that sentencing him to a long stay behind bars would be a devastating blow to your family – is to open yourself up to ridicule and screams of, “He should have thought about that before he decided to kill a man.”

Although the numbers are smaller, what we’re doing at immigration detention centers is worse.  The only “crime” that these people are accused of is fleeing torture, rape, and murder.  They migrated to land controlled by the U.S. government too late – European immigrants already staked claims to territories by murdering the previous inhabitants.  Those prior inhabitants had immigrated from Siberia and staked their claims by murdering dangerous macrofauna and their human competitors.

All claims of sovereignty, among almost all species, have involved violence.  Even plants strangle their competitors, or steal sunlight, or waft poisons through the air.

But I digress.  My worry isn’t philosophical.  I’m simply afraid that horrendous abuses of power like what’s happening at the immigration detention centers will become tragically routine.

Lots of people voted for POTUS45 in the last presidential election, but demography is working against his political party.  Through gerrymandering, a minority party can maintain control over democratically-elected legislative bodies for a long time.  (Indeed, the electoral college is itself a form of gerrymandering, designed as a tool to suppress the influence of liberal northerners.)

But the Supreme Court is an even better tool for minority control.  A mere quintet of hate machines can shape the entire country.  Barring a constitutional amendment imposing term limits, or a wave of Supreme Court assassinations during the next administration, they will.

After we finished graduate school, K and I moved to Indiana.  Most of Indiana is quite conservative, politically – although Barack Obama did win the state in 2008, the Republican party typically won the state with the highest percentage of votes in the nation while I was growing up.  More so than Texas, even.

K and I moved to the state’s liberal college town, though.  As have many Americans, we chose to live among like-minded people.

In The Big Sort, Bill Bishop argues that choices like ours have caused this nation’s current political morass.  Because we live in Bloomington, perhaps K and I are never exposed to alternative political viewpoints.  More crucially, we probably expect to be represented by a starkly left-leaning politician who knows that conservative voters will never build a sufficient coalition here to make their voices heard.  If our hippie politician ever compromised and cast votes for a conservative idea, primary challengers even further to the left would burble up from the muck to unseat the sell-out.

Political stagnation, in this view, is an inevitable consequence of our increased mobility.

Bulls**t, argues David Daley.  In his meticulously-researched Ratf**ked, he presents evidence that district lines have been carefully drawn to subvert the will of the majority of voters.  In his words,

If we were truly Big Sorting ourselves into homogeneous and like-minded districts, if the boundaries truly didn’t matter, our highest-paid political minds wouldn’t have been working around the clock, risking their careers and reputations, to tweak the maps to give exactly the result they wanted.

the trend in journalism these days is to argue that the opposite of what’s right in front of our nose is true.  Careers are made by taking the counterintuitive position that’s sexy, has a greater intellectual degree of difficulty and stands out from the crowd.  That’s the guiding principle behind, for example, the New York Times’s “Upshot” columns on redistricting which try to show that it’s not the lines, that we’ve sorted ourselves, liberals and minorities in cities, conservatives in suburbs and rural areas.  (Just forget about redlining or years of racial inequality.  We all chose to live where we live, and the history behind it doesn’t much matter!)  In reality, the lines have been drawn so artfully and intentionally that to undersell or deny the significance of this is also to deny the reality of the multimillion-dollar industry that has grown up around it.

That is not what Daley found.  Instead, he found district lines crossing and recrossing streets, tiny bulges in boundaries to include a prominent stadium in one district and a garbage dump in another.  The lines often seem illogical… until they are compared with high-resolution data on voting histories.  Then the lines make sense.

Consider Michigan’s 14th congressional district.  It snakes across the state so that several majority-black areas can be cleaved together, forcing their representatives to win with massive majorities.  This allows as many of these votes as possible to be excluded from neighboring districts: for each Democratic landslide, the Republican party can eke out several victories.  The 14th was carried by Obama with 80% of the vote, as compared to Republican-leaning districts where he lost 45-55%.

Fewer Republican votes are wasted, resulting in a state that votes somewhere between 45% and 55% Democrat having only 35% Democratic representatives.

But this is not our world.  Daley interviewed several statisticians who have studied district lines.  They’ve run computer simulations to test many different configurations of districts to see how ofter imbalanced outcome arise.  And they’ve found that our egregious differences between votes cast and seats won are very, very rare.

We did not stumble into this inequity by accident.  Daley was right to be suspicious when all the highly-paid political consultants were obsessing over the districting maps.

After all, when K and I self-sorted, we accomplished little.  Sure, our town is a lovely place to live.  And we do have a left-wing mayor.  But our representative?  Republican.  Indeed, 80% of Indiana’s representatives are Republican, in a state where fewer than 60% of the voters are.