During our freshman year of college, I was in a long-distance relationship with a young woman who accompanied her self-pleasure by looking at pictures of Rodin’s sculpture.  Our own physical intimacy had progressed no farther than kissing whilst stripped to our skivvies, so Rodin’s art was appropriately titillating.  He depicted situations more intense than anything she’d experienced, but not so explicitly as to make the mystery seem gross or threatening.  There is no softer focus than smooth swells of marble. 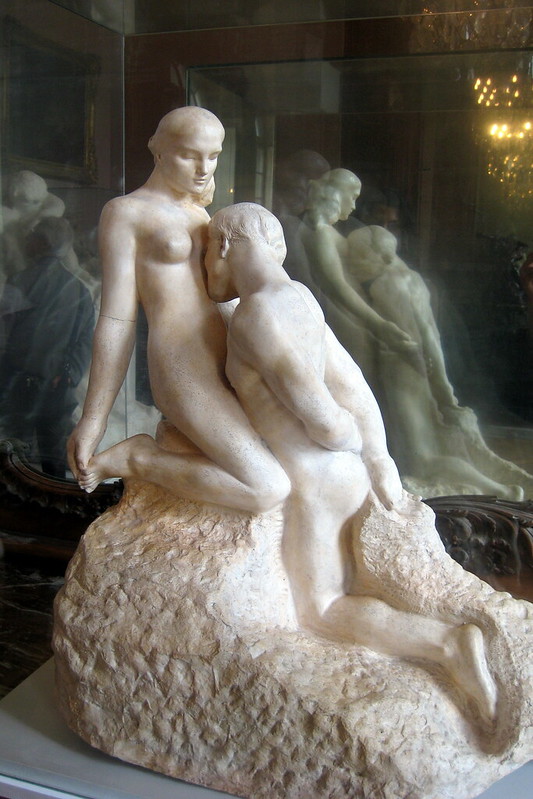 And [Gerty, the young lady whose frillies have Bloom feeling all hot and bothered] saw a long Roman candle going up over the trees up, up, and, in the tense hush, they were all breathless with excitement as it went higher and higher and she had to lean back more and more to look up after it, high, high, almost out of sight, and her face was suffused with a divine, an entrancing blush from straining back and he could see her other things too, nainsook knickers, the fabric that caresses the skin, better than those other pettiwidth, the green, four and eleven, on account of being white and she let him and she saw that he saw and then it went so high it went out of sight a moment and she was trembling in every limb from being bent so far back he had a full view high up above her knee no-one ever not even on the swing or wading and she wasn’t ashamed and he wasn’t either to look in that immodest way like that because he couldn’t resist the sight of the wondrous revealment half offered like those skirt-dancers behaving so immodest before gentlemen looking and he kept on looking, looking.  She would fain have cried to him chokingly, held out her snowy slender arms to him to come, to feel his lips laid on her white brow the cry of a young girl’s love, a little strangled cry, wrung from her, that cry that has rung through the ages.  And then a rocket sprang and bang shot blind and O! then the Roman candle burst and it was like a sigh of O! and everyone cried O! O! in raptures and it gushed out of it a stream of rain gold hair threads and they shed and ah! they were all greeny dewy stars falling with golden, O so lively!  O so soft, sweet, soft!

When he bought the magazine, the cashier supposed Trout was drunk or feeble-minded.  All he was getting, the cashier thought, was pictures of women in their underpants.

Now, however, even the purchase of men’s magazines featuring full nudity or explicit displays of sexuality might seem old-fashioned.  The editors of Playboy, having realized that they could never compete with the plentiful imagery of nude women available instantaneously – and seemingly gratis, since consumers are paying by subjecting their eyeballs to advertisements & their search histories to statistical scrutiny – decided that their magazine would print only racy images of clothed women.

And the sort of pornography that contemporary viewers are enticed by?

In Future Sex, Emily Witt describes her experience attending contemporary pornographic film shoots, but these filmings were sufficiently violent that I won’t describe them, felt queasy reading about them, and strongly wish that they did not exist.  This despite perceiving myself to be a pro-pornography feminist and agreeing with Elen Willis, whose views Witt pithily summarizes by writing that:

I accept that different people consider different sorts of pictures, literature, and film to be titillating, but I dislike the existence of art that blends violence and sexuality.  Many of the men in our poetry classes in the jail have difficulty separating various strong emotions – which I am sympathetic to, since the trauma they’ve experienced give them very good reasons to feel as though these neural wires are crossed – but also means that they have to work hard to separate loving and violent impulses.  They can do it, I’m sure.  Our brains are plastic, and people of any age can learn.  But our world’s saturation with violence makes it harder.

Consider this: by analyzing internet search terms (that data so many of us blithely give away), researchers can predict epidemiological outbreaks in real-time.  I believe this works with flu symptoms, domestic violence, even potential clusters of suicide.  But the search term “rape” is useless for this sort of epidemiological analysis, since so many people typing this word into their browsers are searching for pornography.

It hurts the world to convey that this is reasonable to find titillating.

Or there’s the fact – elided almost entirely by Witt, who mentions only that she eschewed “chaturbate” channels that seemed to originate from a brothel in Colombia – that violent pornography is still filmed using kidnapped women, described by Lydia Cacho in her book Slavery, Inc. (and which description has subsequently led to numerous attempts to murder her).

Thankfully, the company that Witt observed includes brief interviews after each shoot to demonstrate that participation was consensual, but the violence still squiggs me out.  I’m totally fine with pornographic films depicting adult-looking adults engaged in a wide variety of consensual activity, but I hate the normalization of violence.

(Some goofy trivia, offered up as an apology that this essay has been so bleak so far: human males lack a penis bone, likely because they evolved to be bad at sex.  Males belonging to related species – particularly those in which females have more control over whom they copulate with – have these bones, allowing tumescence and sexual activity to go on longer.  By offering a better ride, males increase their chance of propagation.  Whereas the evolutionary precursors to human males were lazy lovers: if you’re an optimist, you might think that this is explained by their traditional face-to-face mating style, ensuring that women form emotional bonds with specific partners, or if you’re a pessimist / realist, you might think that human males, gorilla-like, employ brutal oppression rather than sexual prowess to keep their partners faithful.)

(Actually, was that any less bleak than what came earlier?  Ooops!  Back to your regularly scheduled essay!)

Most of the pleasure of sexuality occurs in the mind, by stimulating our emotions and imagination.  That’s why we’ve failed to proceed to a future of satiation by Woody Allen’s Sleeper-style machines.  The thought that another human is willing to share certain experiences with you excites the mind.

In a world where Leopold Bloom so rarely espied women’s thighs, Gerty’s undergarments could push him over the edge.  In a world of Playboy and Penthouse, Kilgore Trout could be thought feeble-minded for a similar interest in scoping women’s skivvies.  And in our world, young men must want to see pre-pubescent-looking women degraded and abused, else why would so many companies go to such expense to produce that content?

I found the other chapters of Witt’s Future Sex to be far easier to read.  She is writing about the contemporary sexual mores of the wealthy Bay-Area employees of Facebook and Google.  She sets the tone of the book early, describing an older man in line with her at the airport:

He seemed like the sort of man who would pronounce himself a minimalist and say that everything he bought was selected for its extraordinary craftmanship and beautiful design.  But [his] computer bag was a cheap thing with netting and buckles that said GOOGLE on it.  The person in front of him in line wore a Google doodle T-shirt with Bert and Ernie where the Os would be.  In front of him was a Google backpack.

Until I left San Francisco, it never went away.  It was embroidered on breast pockets, illustrated with themes of America’s cities, emblazoned on stainless-steel water bottles, on fleece jackets, on baseball caps, but not on the private buses that transported workers to their campus in Mountain View, where they ate raw goji-berry discs from their snack room and walked around swathed, priestlike, in Google mantles, with Google wimples and Google mitres, seeking orientation on Google Maps, googling strangers and Google-chatting with friends, as I did with mine, dozens of times a day, which made the recurrence of the logo feel like a monopolist taunt.

This extreme focus on the sexuality of tech company employees is humorous, especially to somebody who recently moved away from Menlo Park.  Her characters are clever, and used that cleverness to become rich, but mistake cleverness for being intelligent or wise.  Their collective mindset is so insular that they remain blithely ignorant of most human experience.

For instance, Witt devotes a chapter titled “Polyamory” to a long description of one pair of her friends’ non-monogamous relationships, including this musing from one of the males involved:

He saw [“hyperbolic optimism”] in the “nontrivial” number of his co-workers who genuinely believed there was a reasonable chance they would live forever, who read the works of Ray Kurzweil and made plans for the singularity.  He saw it in his friends, who saw no reason not to try going beyond sexual traditions that had governed societal behavior for thousands of years.  Few people, he noticed, bothered with the question of whether one would really want to live forever.

Sometimes mocking Bay Area people feels a little cheap, since they often are simply naive, having been totally sheltered from reality throughout their rubber-stamped lives, but many act so outrageously entitled (& indeed are often extremely wealthy) that I don’t feel bad about a little ribbing.  I personally would not want to share a world with a cadre of such internally-motivated people granted eternal life.  And the idea that a single set of sexual traditions have “governed societal behavior for thousands of years” is misguided.

In Sanskrit mythology, an elderly king might ask his favorite traveling monk to spend the night frolicking with his (the king’s) wife in order to produce an heir – since the pair will have copulated with the king’s consent, he accepts the child as his own.  In the BBC documentary Human Planet, we see footage of a Wodaabe “Gerewol,” a fertility ritual during which both married men and women are permitted remorseless flings.  One of the most forlorn shots in the documentary depicts a woman consoling her husband, braiding his hair, after he failed to lure a sexual conquest during his decorated bird-like Gerewol dance.  And despite their kapu system of stringent social control, pre-Christian Hawaiians generally approved of non-monogamous sexuality as long as none of the relations were conducted in secret.

More tellingly, Witt includes a chapter describing a trip she and several friends took to Burning Man.  An artist friend of mine, a writer who composed a much-loved guide to creating beauty despite depression, attended Burning Man in the 1990s and said it was the first time in her life she felt at home.  The people there had the same interests as her: DIY culture, extreme frugality to allow plenty of time for art, environmentalism, and social advocacy.

Witt also thinks that the people attending Burning Man have the same interests as her, but these interests differ slightly from my friend’s:

I wanted to go to Burning Man because I saw the great festival in the desert as the epicenter of the three things that interested me most in 2013: sexual experimentation, psychedelic drugs, and futurism.  But everyone said Burning Man was over, that it was spoiled.  It was inundated with rich tech people who defied the festival’s precious tenet of radical self-reliance by their overreliance on paid staff.

I would decide for myself.  I rented an RV with six other people, a group organized by a friend in San Francisco.  I think if someone were to draw a portrait of the people who were “ruining Burning Man,” it would have looked like us.

Do-it-yourself, artistic, activist, maker culture … or sexual experimentation and psychedelic drugs?  I mean, don’t get me wrong, sex & drugs are fun and all… but I know which world I’d choose.