I play board games with a local reviewer.  We often try two or three each week – and I’ve noticed that I’m happiest after playing really flawed games.

Consider, for example, the card game Boss Monster.  You portray a villain building a dungeon full of traps.  Each turn you expand your dungeon, making it more enticing and more dangerous.  Then adventurers appear and venture into one of the players’ dungeons; you win by causing their demise. 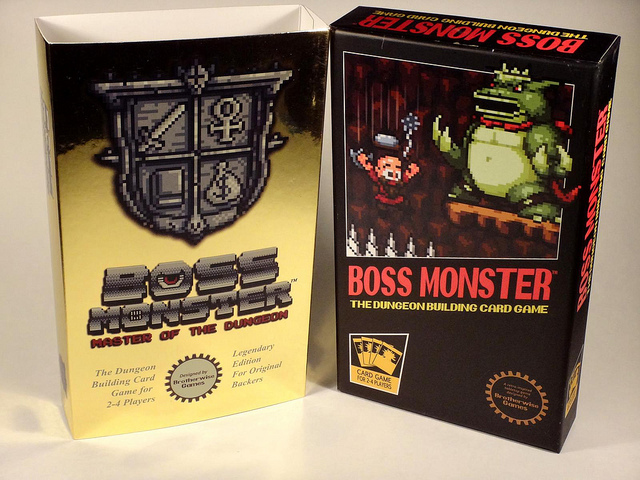 My gaming buddy really dislikes this game: while playing, you make very few meaningful choices.  Sometimes no choices at all, honestly.

But I loved it!  Not just because I have a soft spot for games that portray humans as the enemy (in Ferretcraft, which my family designed, you play as a forest creature and the “orcs” are just green-tinted humans).  And not just because I’m a sucker for cute art (which makes me feel lucky that my favorite artist makes games with me).

Even in his negative review, my buddy stressed again and again how great Boss Monster looks.

I should admit, it wasn’t very fun to play.  Shuffling a deck of cards and sitting down to “play” doesn’t mean much if the game has only marginally more strategy than War.  But there are several really clever ideas behind the game – they’re just poorly executed.

For instance, players are competing to lure adventurers.  If your dungeon has less treasure than an opponent’s, no heroes will visit, and so you can’t get points for dooming them.  Unfortunately, the cards that are best at luring heroes are also the best at dispatching them.  There’s no strategy here – on each turn, you should play the most powerful card.  The design would’ve been much improved if there was a tension between attracting adventurers and harming them.

And the adventurers are each lured by a different type of treasure.  Wizards seek spellbooks, warriors seek weaponry, thieves seek gold.  If you happened to build a dungeon full of gold, and a thief happens to appear, you’ll get to slay that hero.  But the adventurers are drawn from a deck at random, which means there’s no strategy here either.  Most likely, each player in the game will be best at luring a certain type, and the random order that adventurers appear determines who wins.

With a few changes, though, this could be really fun.  A card that’s good at luring heroes shouldn’t hurt them much – then players would have to balance what their dungeons need.  The adventurers should be more difficult to dispatch if several voyage into a single dungeon at the same time, which would impose a cost on being too good at luring them.  And the adventurers should wait in town for a bit before entering the dungeons, which would allow players to plan ahead.  Perhaps the adventurers would spend time drinking ale and boasting in a tavern – each might need a different number of beers before feeling ready to tromp off to his or her doom.

(It’s not clear whether an extremely strong hero would need more beers – a higher alcohol tolerance – or fewer – more confidence.  I think either design has interesting gameplay implications.  If each hero in town drinks one beer per turn, and the powerful heroes can handle more liquor, then you have a long warning period in which to make your dungeon deadly enough to handle hardy adventurers.  Or if weaker heroes require more liquid courage, then players can vie to lure easy points away from their opponents.  We’d probably test both designs and then write lore justifying whichever was more fun.)

With those changes, you’d get to make meaningful choices every game instead of simply doling out cards and seeing who wins.

But even though Boss Monster wasn’t fun to play, it was a blast to think about.  Which made me feel grateful to the designers … and to my parents.

Growing up, there was always an expectation that we’d modify games.  Pieces from the board games we owned were used to make dozens of others.  My brother and I played Risk daily for several summers in a row … but I don’t think we ever played an entire game according to the rules printed on the box.

And it’s not just while playing board games that I feel grateful.  Once we’d learned that we might have to modify games to have more fun, it was easy to view the rest of the world with an eye toward improvement.  More than just games are flawed, after all.  I might feel overwhelmingly depressed by everything that’s wrong with the world if I didn’t feel at least a little joy in tinkering, trying to make things better.

Because it is daunting.  Or at least it feels daunting when I look at the Pages to Prisoners mail queue, knowing that each envelop might be somebody else stuck in solitary with no one to talk to, nothing to read.  Or it might be somebody who’s getting out soon and wants to turn his life around (recently I sent books to somebody who wanted career guides and self help because he’s about to finish a seventeen year sentence).  Or it might be somebody who’d like to play games – our criminal justice system hoovers up all kinds.  But if we abandon people to our current dehumanizing, demoralizing system, we’ll mostly get one type back.

Header image for post: Tinkering studio at the Exploratorium.